Let us look at one of the six teams, team Spirit and its players. 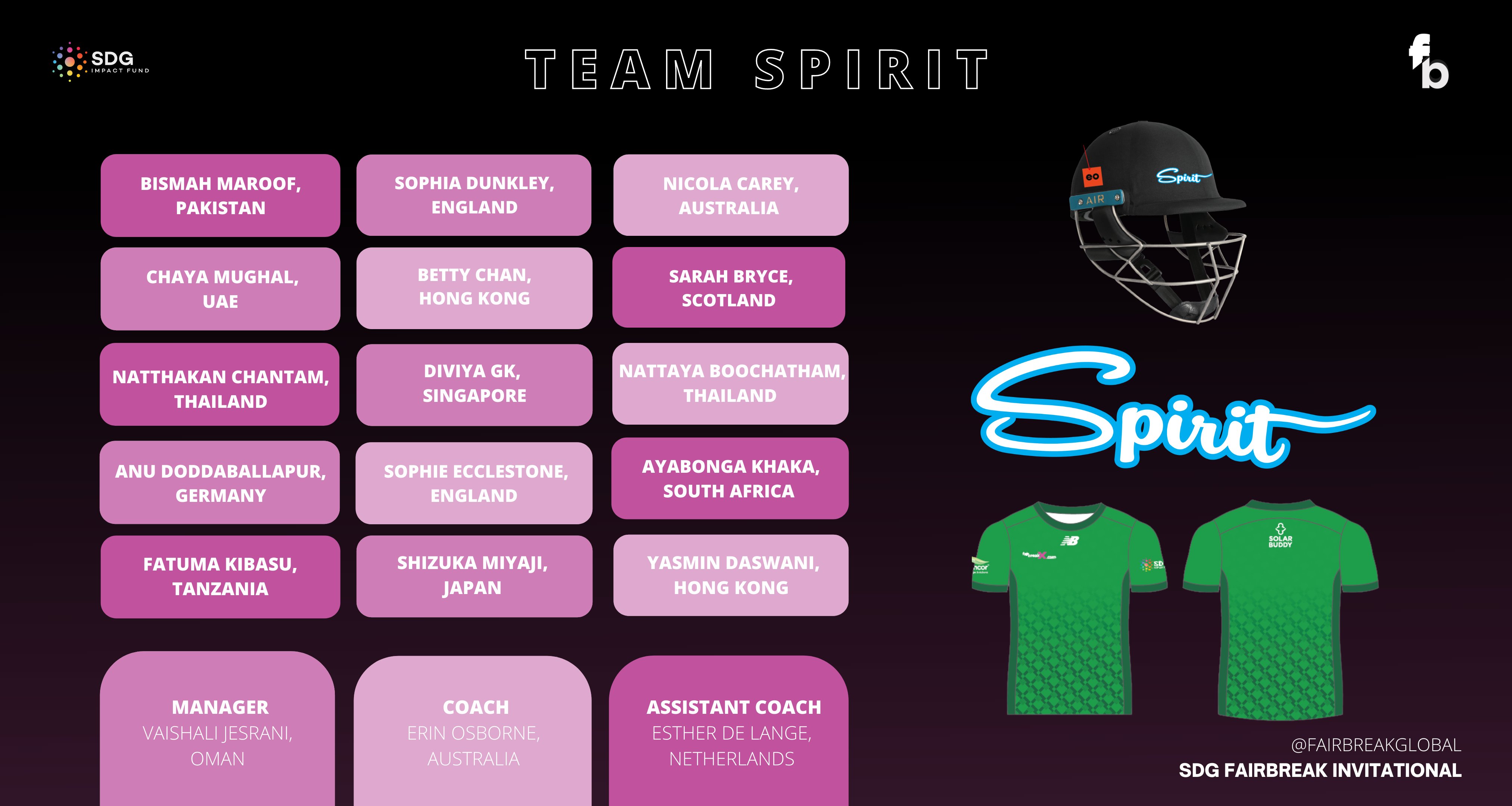 Some of the players to watch out for from this team will be England’s Sophie Ecclestone, who is the world number one ODI and T20I bowler. Apart from Ecclestone, there is Bismah Maroof, who is a stylish left handed batter from Pakistan and Sophia Dunkley, who is a steady middle order batter from England. South Africa’s Ayabonga Khaka and Australia’s Nicola Carey will be the leaders of the bowling attack.

She is the captain of Pakistan. She is a left handed batter and a right arm leg spinner. She has featured in 108 T20Is to date and has mustered more than 2000 runs, including 11 half centuries. The wily spinner has 36 wickets in 3 innings, including the best of 3-21.

The dashing right handed batter from Thailand will feature in the upcoming Fairbreak Global Invitational T20 tournament. She has the experience of playing in 41 T20Is. She has registered 816 runs, including the best of 88 not out. She is an attacking and a consistent bat at the top of the order.

She is the captain of Germany’s women’s cricket team. She is a right handed opening batter and a right arm medium pace bowler. She has played 18 T20Is, scored 233 runs and picked up 19 wickets.

She is a right handed batter and right arm off spinner from Tanzania. This prolific batter has two T20I centuries and three half centuries in 17 T20Is. She has scored 604 runs at a strike rate of more than 120. With the ball, she has accounted for 12 wickets in 13 innings.

She is the first Japanese player to sign a professional contract to participate in an overseas competition after being chosen for the Fairbreak Global Invitational T20 tournament. She is a left handed batter and a left arm spinner. She has featured in nine T20Is, scored 150 runs and picked up five wickets.

She is the world number one T20I and ODI bowler. The tall left arm spinner has played 50 T20Is and has struck with 68 wickets in 49 innings, including the best of 4-18. Apart from her lethal bowling, she is more than a handy lower order batter.

She is a right handed bat and right arm off spinner who has featured in 12 T20Is for Singapore. She was a part of FairBreak set up in 2018. The former Singapore captain is also the first female to play against men in the men’s leagues in Singapore. She has played across different parts of the world like in Australia, South AFrica and the Netherlands. Her uncle, Stacey Muruthi was the former captain of Singapore men’s cricket team.

She is one of the best all-rounders of Hong Kong. She can open both the batting as well as the bowling. She has been playing international cricket since 2019. She has featured in 20 T20Is. The right handed batter has mustered 38 runs in nine innings. With the ball, she has picked up 24 wickets in 20 innings. (As of April 26, 2022)

She is a good right handed middle order batter from England. She has different gears and can pace her innings well. She has the experience of playing 23 T20Is for England in which she has mustered 159 runs in 13 innings. She can also roll her arm over to bowl leg spin.

She is a bowling all-rounder from Australia. She is a right arm medium pace bowler and a left handed batter. She has represented Australia in 23 T20Is, claimed 15 wickets in 21 innings and scored 153 runs in 11 innings.

She is a right handed batter and a wicket-keeper who represents Scotland at the international level. Since her debut in 2018, she has played 32 T20Is for Scotland and mustered 706 runs. Behind the stumps she has accounted for 42 dismissals.

She is a left handed batter and right arm off spinner from Thailand. She has played 42 T20Is, scored 459 runs in 36 innings and picked up 59 wickets in 41 innings. She has one T20I half century and three four wicket hauls to her name.

She is a right arm speedster from South Africa, who has featured in 36 T20Is and picked up 32 wickets, including the best of 4-23. She has been around at the international level since 2012. She is known for her consistency with her lines and lengths.

She is a right handed middle order batter from Hong Kong who has played 17 T20Is so far. She has registered 189 runs , including the best of 31.

She is the captain of Oman. She plays as a right-handed batter and wicket-keeper. Between 2020 and 2022, she has featured in 13 T20Is, scored 147 runs, and claimed five dismissals.

She is a former Australian cricketer who played two Tests, 60 ODIs and 59 T20Is between 2009 and 2016. She played as a right-handed batter and a right-arm-off spinner. At present, she represents Melbourne Stars in the WBBL. Apart from playing cricket, she coaches the ACT’s female Meteors Development Squad, and is Cricket ACT’s Male Pathway Manager.

She is a former captain of Netherlands, who played 15 ODIs and six T20Is between 2005 and 2011. She played as a right handed batter and a right arm off spinner. She could also keep wickets occasionally. Later she continued to play cricket but not at the international level. She was last seen playing in Derby during the 2018 Aboriginal XI Women tour of England.