Are you a cricket buff like us? Are you a bibliophile? Don’t worry, we’ve got you covered!

Here’s our handpicked read just for you.

1. The Fire Burns Blue: A History of Women’s Cricket in India by Karunya Keshav and Sidhanta Patnaik.

The Indian women’s team won series in New Zealand in 1995 and a test match in England in 2014. Yet none of this was ever publicized. How and why did the women’s game fall behind? The book answers these questions and more. The 2017 Women’s Cricket World Cup saw the Indian team make it into the finals and the tournament saw an unprecedented high for viewership for Women’s cricket. But how did women’s cricket in India get there? What were the challenges? The book tells this story and focuses on Mithali Raj and Jhulan Goswami who have brought home many laurels worth celebrating. 3. Women’s Cricket and Global Processes: The Emergence and Development of Women’s cricket as a Global Game by Philippa Velija.

It considers how and why men’s and women’s cricket have merged and its influence on those involved in the game. The book will appeal to all those interested in the growth of women’s sport. 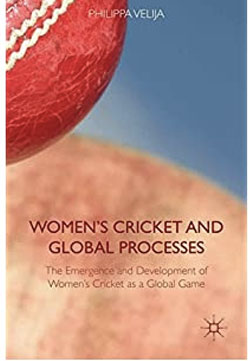 Virat Kohli is the undisputed king of cricket. But what makes him so good? How did he become the beast that he is today? Driven speaks about Kohli’s early days and offers finer details of what he went through that transformed him from just another player to the run machine that he is known as.

Also Read:  5 Must Read books for every cricket fan 5. Playing it My Way by Sachin Tendulkar.

The book summarizes Tendulkar’s early days, 24 years of the public glare, and unknown aspects of his life. It features in the Limca Book of Records for being the best-selling adult hardback in both the fiction and non-fiction category. The book offers not just glimpses into the lives of cricketers but also iconic moments in their careers, turning points of matches, and their impact on their careers. Since it is a collection of unconnected stories it offers one the liberty of reading any section based on one’s preference. 7. Out of the Box: Watching the game we love by Harsha Bhogle.

Harsha, with his sense of drama, comparable only to cricket, pays tribute to some greats like Lara, Jayasuriya, Ganguly, Sehwag and of course the God himself Sachin. The one pertinent question he asks is -Can India really be no 1 in all the 3 forms of the game? The answer to this lies in the pages of this book. This book narrates the story of 11extraordinary Indian cricketers, who shaped the destiny of Indian cricket, from different eras – Dilip Sardesai and Mansoor Ali Khan Pataudi of the 50’s to Mahendra Singh Dhoni and Virat Kohli of today. 9. A Corner of a Foreign Field: The Indian history of a British Sport by Ramchandra Guha.

Initially written as a biography about a gifted Dalit left-arm spinner, Palwankar Baloo, and his exploits, the book later ended up becoming a social history of Indian cricket. Later chapters explore Hindu and Muslim cricketers in colonial India and passions provoked now when India plays Pakistan. 10. The Dhoni Touch: Unravelling the Enigma that is Mahendra Singh Dhoni by Bharat Sundaresan.

Bharat Sundaresan got his inspiration to write the book after watching the movie MS Dhoni: The Untold Story. But that’s not to say that those who have watched the movie will find nothing new in this book. The author has managed to delve deeper into the psyche of the cricketer. The author has managed to cover, though fleetingly, some of the controversial topics like the IPL scandal or Dhoni’s relationship with his estranged elder brother and his decision to retire from tests midway through the Australian series.