But with the shock news of the captain’s retirement, this could be a major upset to the T20’s team. With over 2364 runs to her name including 17 fifties with a best of 97 not out this team, the captain led her team In over 32 T20Is including 3 world cups in 2012, 2014 and 2016. In addition, this star player played what we be her last T2I Match against England with an unbeaten 30 off 32 balls. This not only made her the Bookies favourite on SBO.net, but this also helped to make a household favourite for those following the team closely.

When asked about the retirement from the sport by BCCI TV, Raj had this to say:

“After representing India in T20 internationals since 2006, I wish to retire from T20Is to focus my energies on readying myself for the 2021 One Day World Cup. It remains my dream to win a World Cup for my country and I want to give it my best. I thank the BCCI for their continuous support and wish the Indian T20 team good luck as they prepare for the home series against South Africa Women,”
As this star player of this side, there are many that are beginning to question whether or not Harmanpreet Kaur can lead the team to victory in the T20s. Though she has yet to rack up and illustrious career similar to that of the previous Capitan, Kaur has a lot to prove and has the potential to lead her team to victory in the long term. Though this is still yet to be proved, there is a great potential for this team and could see them go far in the competition in the long term. 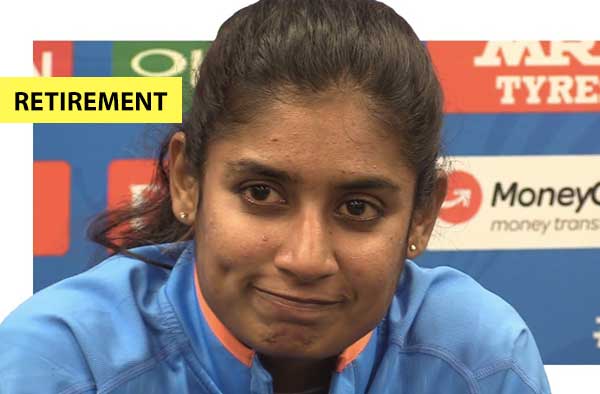 Will We Ever See Mithali Raj Again?

The short answer is yes you will. With the upcoming 2021 world cup coming up you will see her captain the team to a potential victory. With the title being held between the 6th Feb – 7th March 2021, this is set to be a huge time for the women’s cricket team but could there be a victory in sight for the team. But this amazing career does not come without its challenges. This of cause is in reference to the very public war of words between Raj and former national team coach Ramesh Powar. This was a very public feud that made its way into a number of media outlets and leads many to question her spot on the national team during this time. Despite the intense scrutiny from the media, the superstar rose to the occasion playing her heart out with an undefeated lead when playing with the national team. Though she is no longer playing alongside these teammates, there is no bad blood between them as the superstar wishes then the best of luck for the upcoming season.
With this new position under her belt and training well and truly underway for the international team, could this women’s tennis superstar see herself winning many more titles on the international stage? Only time will tell.