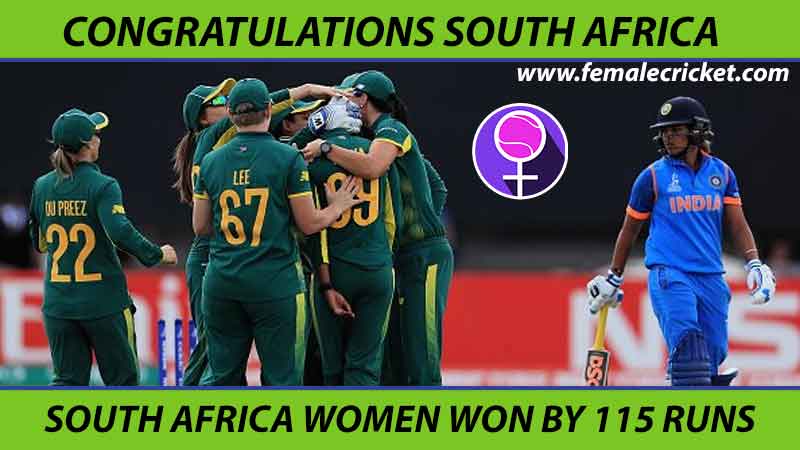 A bad news coming out there as it was a disappointing day for India Women when they played their S. African counterparts in the 18th match of this edition of Women’s World Cup. It was a complete off day for the Indian eves as they lost to SA Women by a huge margin of 115 runs.

And what an all-round performance by S.African team who moved up to 4th place in the points table after defeating India.

Earlier in the day, India won the toss and elected to bowl first. But, it became evident just after 10 overs of SA innings that this was rather a strange decision given the conditions on the ground. Indian bowlers were brutally hit all over the ground by opener Lizelle Lee as SA’s scorecard read 71/1 after 10 overs.

Although India’s strike bowler Shikha Pandey got rid of Laura Wolvaardt in her very 1st over through a brilliant in-swinger, Lee continued to hit boundaries quite comfortably. India’s entire bowling department seemed to be helpless as she was punishing them for getting her opening partner out early by her powerful shots. After Pandey, J.Goswami and Ekta Bisht were hit harshly, the spin combination of Deepti Sharma and Punam Yadav was introduced by the Indian captain. But there was no stopping of Lee who was on fire as 300 was not looking far away with this kind of aggressive approach.

Even though Bisht got rid of Trisha Cherry in 16th over but Lee continued to hammer 4s and 6s reaching her half century in just 44 balls. Then, the ball was given to Harmanpreet Kaur who lived up to the expectations of her captain and got the much needed breakthrough as Lee was given LBW out in 21st over. Her incredible innings of 92 in just 65 balls included 10 fours and 7 sixes.

Only then the Indian bowlers were able to bring down the run rate below 6 as SA was 145/3 at the end of the 25th over. Two wickets fell in quick succession in 28th and 29th over as P.Yadav and H.Kaur bowled beautifully.

By the end of 2nd batting powerplay, the score was 203/6 as Goswami got Sune Luus out in the 40th over. While Yadav completed her 10 overs bowling spell (10-1-28-1), SA captain, Dane van Niekerk on the other hand played a quick innings of 57 runs from 66 balls.

Though India took wickets at regular intervals, but still SA’s total stood at 273/9 being their highest against India. Shikha Pandey was the most successful bowler for India with bowling figures of 9-0-40-3.

A big responsibility was lying on Smriti Mandhana as India had never scored more than 261 while chasing. But she got out cheaply in the 2nd over itself as we saw how this batter’s strength is her weakness too. Just when Indians were recovering their early loss, Daniels bowled out Punam Raut in 12th over.

Then came the Indian captain and India needed a captain’s knock from Mithali Raj today. But what happened next was completely unexpected as Raj got out on the first golden duck of her career. Soon, explosive Harmanpreet Kaur was walking back to the pavilion.

India was in big trouble as S. African bowlers had put them on the back foot. They were reduced to 53/5 after 16 overs as Veda Krishnamurthy also got out in quick succession. The very next over saw the dismissal of Shikha Pandey. India was collapsing now; as if a black hole had opened up and Indian batters were going into it rapidly. Then came a run out and India’s scorecard read 83/7 at the end of 25 overs.

As India was heading towards a humiliating loss, Deepti Sharma seemed to be lone fighter as she reached her 7th fifty in 28th over. Together Sharma and Goswami were able to delay the inevitable by a few overs as India reached 100 in 33rd over. Sharma’s vigil finally came to an end in 39th over and India were 128/8 at the end of 40th over. Meanwhile Goswami got some valuable runs before the entire team got out for 158 in 46 overs. Goswami remained unbeaten and SA skipper ended up with 10-0-22-4 as her bowling figures and became the 2nd captain to score a 50 and take four wickets in single match. Also, Niekerk was adjourned the Player of the Match for her all-round performance.

This is India’s 3rd largest defeat in Women’s World Cup till date. Had Indians won this, they would have sealed their semi-final berth. But given the results, the road ahead is not smooth for them as they will have to beat mighty Australia and spirited New Zealand to move forward.

As of now, we just hope Indians get over this loss quickly and come back with some splendid performance in their next fixtures.