As the Kia Super League approaches its last week, with Western Storm and Loughborough Lightning sitting comfortably on the top of the table, there have been quite a few notable performances from the individuals. Let us have look at the top performers of this season with the bat.

1. Laura Winfield (Yorkshire Diamonds)
With only 6 matches under her belt, Winfield has been a mainstay for Yorkshire Diamonds scoring 195 runs at a modest strike rate of 124.20. She has managed to score one half century with a highest score of 64 against Southern Vipers. With a minimum of 2 more matches to go, Yorkshire Diamond’s fans will be hoping she manages to score more freely and help the team qualify for the semis.

2. Sophie Devine (Loughborough Lightning)
The six hitting machine from NewZealand has not had the best of times as per her standards, but still ranks 4th in the list of top scorers this season. She has scored 204 runs till date with a strike rate of 152.23. She currently has hit the second most sixes (14) in the tournament. Her top score of 61* was against Surrey Stars which came of just 32 balls. Loughborough Lightning will wish that she continues her form and destroy the opposition attack and stake their claim for the championship.

3. Amy Satterthwaite (Lancashire Thunder)
She is yet another Kiwi to feature in the list of top performing batsman this season. This top order batsman has provided the much needed stability for Lancashire Thunders where the likes of Nicole Bolton and Harmanpreet Kaur have not been able to live up to the expectations. She has scored 243 runs this season with an average of 40.50 and impressive strike rate of 133.51. She has twice crossed the mark of 50 runs and her superb knock of 85* came against Western Storm but towards a losing cause. She will be hoping for more support from other batsmen in the team to give Lancashire Thunder fans the hope of making it to the semis.

4. Heather Knight (Western Storm)
The English captain has had a wonderful season with the bat and is one of the reasons why Western Storm find themselves at the top of the table. The captain has led from front and has made 250 runs at an average of 50 per innings. She has been striking at a rate of 132.27 per 100 balls and has provided the much needed solidity in the Western Storm strong batting lineup. Her blistering knock of 97 off 62 balls against Yorkshire Diamonds in their very first match of the season had set the tone for the tournament where now they are the table toppers.

5. Smriti Mandhana (Western Storm)
The vice captain of India has been the player of the tournament so far. She not only has scored ample runs for the team but the rate at which she has been scoring those runs tends to give nightmares to the opposition team bowlers. Smriti Mandhana has amassed 387 runs with a mammoth average of 77.40. This swash-buckling opener from India has set the tournament on fire with 21 sixes in her kitty and an impressive strike rate of 185.16. She has managed to score the only century of the tournament (102 off 61 balls) which came against Lancashire Thunder. She also scored a record fastest half century in just 18 balls in a rain truncated match against Loughborough Lightning. The way she has been blooming in confidence, the signs seem extremely positive for Western Storm and especially for the Indian fans with the T20 World Cup soon approaching. Way to go Mandhana! 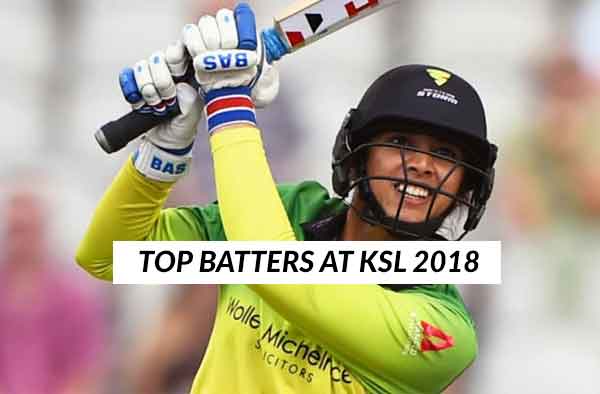 The race for top 5 batsmen is going to surely intensify in the last phase of the tournament, with players like Rachel Haynes, Nicole Bolton, Natalie Sciver, Suzie Bates and others finding form and looking forward to do their best for the sides to help them qualify for the knockout stage.