Hyderabad and Indian women’s cricket has a long history. This city has produced some quality cricketers who went further to represent India at international level. Archana Das, Gouhar Sultana, Mamata Kanojia and Mithali Raj have all made us proud. There’s one more young promising talent breeding in the heart of this city. Ramya Doli has proved her caliber at U16, U19 and senior level categories. She has also featured in INDIA GREEN team and has played against the likes of Jemimah Rodrigues and Taniya Bhatia in India A team in 2017. In a chat with Female Cricket, Ramya talks about her journey and her future aspirations. 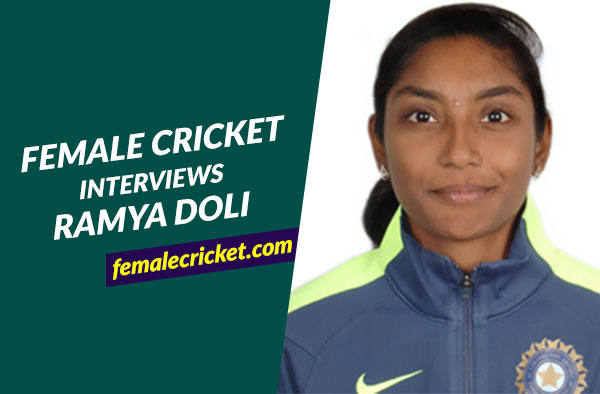 1. What was your first interaction with cricket like?
I remember I was 10 years old. I went to the ground with my younger brother who used to play cricket back then. Day by day the interest in the game made me learn more & more and eventually the interest grew.

2. Walk us through your initial (childhood) cricket days? Any gully cricket moment that you remember?
Every Sunday I started visiting the ground and spent most of time learning the rules and analyzing the beauty of the game. And on the week-days, I played gully cricket after returning home from school.

3. Did you play any sport other than cricket in your childhood? If yes, what made you stick to cricket?
I used play kho-kho, kabaddi and has represented my school in several tournaments. I enjoyed these sports but nothing matched the interest I had developed for cricket.

5.Who were your cricketing role model / inspiration whilst growing up?
Rahul Dravid is my all time favorite and a role model. Recently, I have started liking Harry Di’s (Read Harmanpreet Kaur) batting and her aggression on the field inspires me.

6. Why did you choose cricket back then despite knowing the challenges and the hardships one has to face throughout her career?
Since I spent most of my time playing cricket with boys, I got hit by ball many times. My parents were really concerned and warned me several times. But still I never thought of discontinuing the game.

Life is all about challenges you face and the work you do to overcome them. The passion for game always brought in lots of confidence and power in me and allowed me to face all the challenges. Cricket is all mental – its about how strong you compete with yourself.

7. Which club and coach did you start your journey with? Which all club have you represented so far?
I started my journey with coach Brahmam sir at BHARATH DYNAMICS LIMITED (BDL). Only employees and their children who were interested in cricket were allowed to join the camp. As it’s a defense company, outsiders aren’t allowed inside to practice. Majority were the boys participants, hence I used to play practice games with boys till I was 13.

8. What age did you make your domestic debut? Were you excited with the opportunity or nervous with the expectations from you?
At 15 years, I joined HYDERABAD CRICKET ASSOCIATION (HCA) and that was the year I made my domestic debut in U16 tournament which was held in MYSORE. I was seriously excited with the opportunity given to me. Later, with the performance and my confidence, selectors promoted me to U19 & U23 and seniors.

9. A cricket match you played, and still remember and have enjoyed the most?
It will always be the match against Goa on 23rd September, 2015 at RVR cricket grounds in Mangalgiri. I was playing my U-19 tournament where I scored second century at the same ground in the last ball of the inning. I remember, I was on 99 and just 1 ball left in the inning, I swirled my bat, ran quickly and had to dive to complete my century. What a feeling that was!

10. You have played for Hyderabad and India Green recently. You are known to be one of the promising cricketers from Hyderabad. How has the journey been so far? Highlight some of the high-low moments you’ve witnessed so far?
The season 2015-16 was one of the best season where I was the top run-getter in the inter zonal U19 tournament. That was the season when the national selectors realized my abilities and selected me for INDIA GREEN which gave me more confidence.

Later 2016-17 was a bad patch, which I suppose every player goes through. I didn’t perform in any of the tournament that season and that got me thinking.

11. (Approx) how many domestic female players do we have in India right now? What all tournaments are available for them today?
I think there are more than 450 domestic female players we have in India right Now. There are many tournaments and camps organized for female domestic players by BCCI these days. Some of them are U16,19,23 and seniors ODI and T-20 tournaments along with zonal and NCA camps. Recently there was a spinners camp. I think BCCI is planning to organize many more camps and matches for domestic players.

12. Which was the recent tournament you played? How did you perform there?
Recently, I participated in U23 T20 tournament held at mangalgiri. I didn’t perform to my best. Only positive was ending the tournament with 33 runs.

13. Tell us about your coaches who has helped you shape your cricket career?
Brahamam sir, Nooshin Di (Nooshin Al Khadeer) , prince sir and Shiva Kumar sir has helped me improve my basics and techniques related to the game.
Purnima Rau ma’am has supported me and given me confidence in my ability. And made me realize that “I CAN DO.”

14. How was it playing with the younger lot like Jemimah Rodrigues, Deepti Sharma and Taniya Bhatia in the challengers trophy?
Playing with Jemi, Deepti and Taniya was a great experience. Jemi was always very supportive and used to scold me whenever I was not performing my best.

15. Which has been the turning point in your cricket career?
Senior T20 elite group super leagues held at Rajkot, playing against Railways where I scored 159 and we were chasing it. I scored 68 runs and a hundred run partnership with Shravanthi Di. I think that match was the turning point of my career.

16. Do you set goals for yourself?
Yes I do set goals. Match by Match!

17. Any superstition that you follow?
Yes I do follow superstitions before the match. Praying to god before going to sleep and before leaving for a match leaves me with positive vibes.

18. What would be your message to your sisters aspiring to become a professional cricket player?
Be bold and strong. Never look down at yourself. Be prepared to hustle and struggle. It’s all worth it.

19. How special was your India A experience against Bangladesh Women last year in Belgaum?
It was a dream come true moment playing for INDIA ‘A’. The tournament taught me so much being with the coaches like TUSHAR SIR, BIJU SIR and Trainer AFZAL SIR.

20. Your views on our “Female Cricket” platform?
I think “FEMALE CRICKET” is the best platform, one where people can learn more about the domestic players from your interviews. The analysis and the news you present about the matches of women’s cricket is loved and appreciated by all of us. Hope you continue to inspire us.