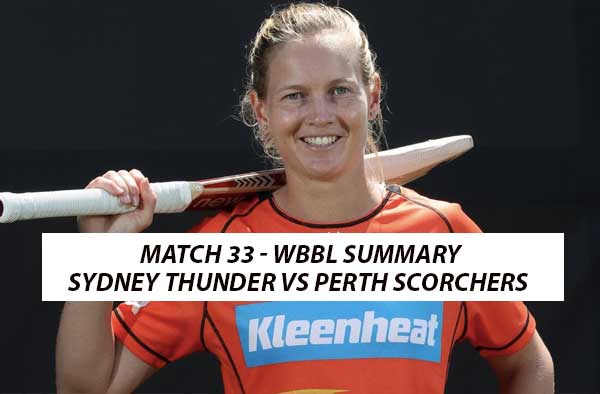 1st Innings Summary – Utilizing the batting powerplay restrictions to the fullest, Sydney Thunder openers made 68 runs in first six overs. Piepa Cleary was brought into attack in the 7th over and she did her job well by getting wicketkeeper batter Rachael Priest bowled out on the last ball of her first over. But it hardly affected the run-rate as in-form Rachael Haynes made another half century and on the other hand, run-machine Harmanpreet Kaur made a quick-fire 45 runs in just 29 balls which included four 6s and a four. Stafanie Taylor made a useful contribution of 24 runs towards the end of the innings.

2nd Innings Summary – Chasing a big total, Perth Scorchers’ openers exploited the batter-friendly conditions even better. While, Opener Ellyse Villani made 66 runs in 50 balls and remained unbeaten till the end, skipper Meg Lanning made 76 runs in just 40 balls before getting run out in 10th over. Despite disciplined bowling, Sydney Thunder bowlers were not getting any help from the pitch and were struck all over the ground. Needing six runs in six balls, Perth Scorchers Women achieved the target in 19.5 overs to win the thriller.

Player of the match – Meg Lanning