Mansi Joshi, born on 18 August, 1993 in Punjab is one of the young forces who have recently joined the Indian women’s cricket team. Mansi Joshi has played for Haryana state cricket team and has performed with both bat and ball. 2016 was an eventful year for Mansi, who earned her National call and lived the opportunity of playing against Bangladesh Women in a T20 Match. Following her performance in the T20, Mansi was called up for an ODI debut in 2017 against Ireland women. Her ability to swing the ball is impressive. Female Cricket interviewed the young and fierce Mansi Joshi, as she takes us through her cricket journey. 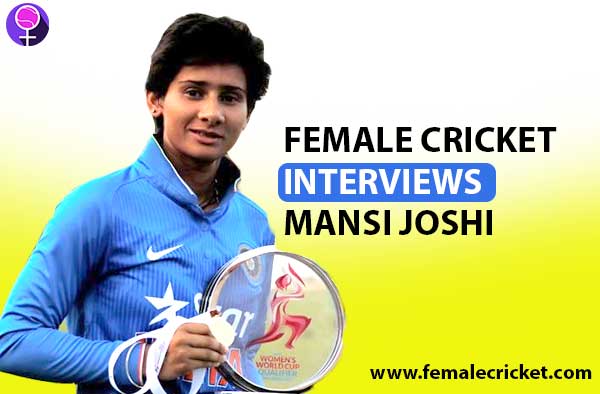 1. What drove you to cricket? Walk us through your initial cricket days?
When I was 9 years old, I remember playing cricket with my colony friends and cousins. From that time, I started building up interest in cricket. My initial days were difficult and challenging due to lack of cricket knowledge and practice. I had once attended trails at Haryana Cricket Association where I got selected in Under-19 in Senior Women’s state team. This was my first attempt. I never looked back after that and soon started my professional cricket training and practice.

2. Any siblings (brother-sisters)? If yes, were they equally interested in Cricket? Who supported you the most?
Yes, I have a younger brother and a sister. They both are studying currently. My whole family is my support system, specially my coach Virendra Singh Rautel.

3. Who were your cricket role model / inspiration whilst growing up?
My role model, undoubtedly, were legendary Sachin Tendulkar and Brett Lee. I was in awe with their dedication towards the game and that has motivated me a lot to do better with each game.

4. How did you cope up with your studies / education / other commitments along with cricket?
Managing studies alongside cricket was difficult, as I had to keep one at the priority. I chose to put Cricket as the priority and in the remaining time scheduled my studies and other chores. My school friends have helped me with their notes. Finally, I graduated recently. My family took care of the other commitments, allowing me to focus on my game which has certainly helped me a lot. 5. When did you realize that you have to become a cricketer and play for Team India?
As mentioned, Sachin Sir has always been my role model. He somehow gave me the energy to pursue and continue cricket amidst the daunting challenges. I was fortunate to have received the opportunity to represent Haryana Cricket Association state team. Luckily, I performed well. From there on, my coaches and my well wishers made me realize my cricket strengths which boosted my morale. i realized that with consistent performance, and hard work, I can be where I want to be – in the Indian women’s cricket team.

6. You have so far played 3 ODIs and 1 T20I. Which match did you enjoy the most?
Matches against Bangladesh in both the format ODI & T20 were tough matches, which I enjoyed a lot. I could swing the ball the way I wanted.

7. When and how did you come to know about your selection in the national ODI team? Could you recall the moment and describe it in words?
I remember, I was in Bangalore those days, preparing for India Qualifiers camp. I got a call from Vikas sir and he told me the good news and congratulated me. I immediately called up my family and my Coach Virendra Singh Rautela and narrated them the news. It was a proud moment, for me, my family and for my coach too. He was the happiest of all.

8. How special was your debut T20 Match against Bangladesh women and you also bagged a wicket?
I cannot describe that moment in words. It was very special to me and is still fresh in my memories. When you are being given a national call, there’s obviously some sort of expectations. And when you show faith in the selectors belief, you know you have done something great. This was one such moment. First wicket at an International platform, was a proud and happy moment. 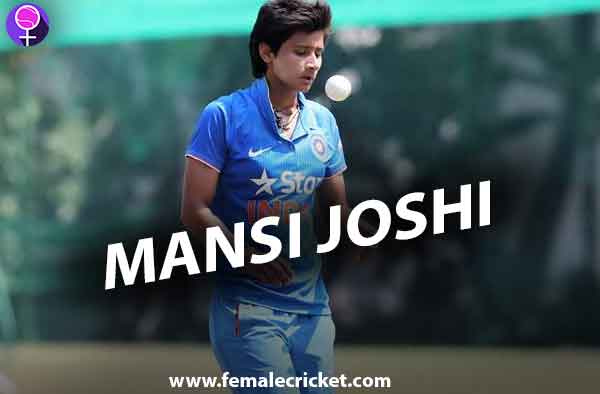 10. How happy were your family members and friends knowing that you are representing the national team?
My family members and my friends were overexcited, were celebrating when they got to know about my National selection. Watching me, represent the national colors was one of their dreams. They had put in a lot of effort to support me, motivate me. My mother, my maasi (Maternal Aunt) , maamu (Maternal uncle) and my all cousins were there for me all the time just to see me fulfill this dream.

11. What was going through your mind in the last over of World Cup Qualifiers final against South Africa last month when India needed 2 off the last ball?
When we needed 8 off the last 2 balls, of-course we were pretty nervous and were keeping our fingers crossed. But Harman Di’s presence at the pitch did keep the hopes alive for us. We know how strong hitter she is and that gave all of us the confidence. I knew she can do it and she did it.

12. Consecutive wins at world cup qualifiers must have boosted the overall confidence. How excited are you and the team for ICC Women’s World Cup 2017?
Yes consecutive win at world cup qualifiers has boosted the overall confidence in team. We all are excited and focused for ICC Women’s World Cup 2017 starting this June. We would want to continue our good performance in the world cup too and make India proud. More importantly, we want the blessings and good wishes from our country with 1.2 billion forces. 13. Your views on Female Cricket as a platform?
Female Cricket is doing great for female cricketers like me, by promoting and raising our voice, highlighting matches, news and daily updates. I am sure you guys are motivating girls worldwide by talking and celebrating our performances. Keep up the good work.

Well, it’s not over yet. Watch this magical spell by Mansi Joshi bowled to Thailand cricket captain Sornnarin Tippoch at the World Cup Qualifiers 2017.

Also Read:  Cash Prizes and Rewards awarded to India’s Women Cricket Team for their performance in the WWC 2017