That is what makes any player who she is. She makes it look so easy, so much so that we are oblivious and ignorant of the effort and hard work that goes into it behind the scenes.
Such is the journey of Jasia Akhtar. Hailing from Kashmir, she’s a woman who broke off from cricket only to come back to it once again. She has proved that nobody said it would be easy and that what comes easy is never worth it. 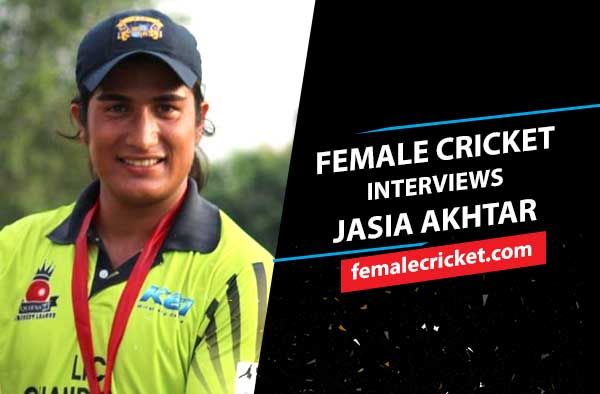 In a recent interview with this rising star, when asked about when her love for cricket blossomed, she was quoted saying that “I have been playing the sport ever since my childhood.”
She further said that her love for the sport was such that it always kept growing. However the path was one that was crooked and at many points even broken.

“I had always loved playing the sport and the love in time only grew. However, Kashmir was a place where there was lack of facility.”

The batswoman also spoke of how because of the lack of facilities in her native place, she shifted base to Punjab and followed her passion. On being asked if she moved to Punjab because of the lack of facilities in Kashmir, Jasia continued, “Kashmir often saw curfews. Kashmir had its own restrictions and limitations and often the conditions of the state wouldn’t support my desire for practise and coaching. There wouldn’t be any proper practise ground or coach who could mould me into a player. Thus, I decided to move to Punjab and pursue my dream as I knew that in Punjab there would be people who would recognise my talent and help me become a better player.”

Akhtar further spoke about how in Punjab, she got the much needed guidance of coaches who helped her in improving her game, pointed out the mistakes and rectify the same too. It was here that she got to know what the national side looks for in a player and what it needs to be called “A woman in Blue”.

Sport and women in earlier times has been a combination that was never encouraged. Most wanted their daughters or sisters to get married, establish a family of procreation and engage into doing the household domestic chores. Keeping that in mind when Jasia was asked how her family and society reacted to this dream of hers and if she got their approval, she went onto say “My father was always supportive. He had always been fascinated by sport and he stood like a pillar by me. Coming from South of Kashmir, my neighbours and all those living in my village had also been my strength. Hailing from a village that had been extremely poor with lack of basic needs such as electricity, the villagers saved their battery only so that they could see me playing on their phones. That’s the kind of love and support that I had gathered.” She was also asked about whom she owes her achievements to. The woman from south Kashmir said that “I have never attended coaching classes regularly for even a month. All that I did was look at the legends play. I used to jot down points in my diary and go through them at night before going off to sleep. And thus, I’ve mostly self trained myself. I’ve seen people play and I have learnt through observation.”

It was mind boggling when she said, “I often get worked up when I see people train for a year because I have never done that. I have never gone through such training routines.”

Full of confidence and self belief she also mentioned about how she thinks that if she’d gone through that kind of sweat she would probably be someone whom no one could have managed to get out. She would be invincible.

However, then there came a twist.

When progressed further and delved deep into her family and their struggles, Jasia went onto say that “Even though I had the moral support of my family and my society, the economic support always lacked and was extremely essential. I was the eldest among my siblings and my father was always physically weak. My sisters studied because they were young and the brothers worked. The expenditure where my cricketing career was concerned was higher than what my fathers income was and being a part of a family where I had five siblings I chose to drop this idea of cricket from my mind for a bit.”

It was only after Jasia gave her board exams that she took to cricket once again in 2013. Because of her economic state, Jasia has parted ways with the sport for approximately 7 years. She feels that this was a major drawback where her life is concerned. She feels she would have otherwise been a part of the national side today.

Akhtar was further asked “Do you think it would be more advantageous where you’re concerned if you played or represented a state other than yours in the sport keeping in mind the curfews and safety conditions?”

The first player to be representing Jammu & Kashmir in the national side went onto being extremely critical and raised an important concern when she said “The Jammu And Kashmir Cricket Association has never given so much of an importance to women’s cricket. This is one of the main reasons why representing another state would be more beneficial. The funds allocated for women’s cricket is also insufficient and even on being given a late notice for trials, Jammu and Kashmir have such talents that they still perform and do so wonderfully.”

Jasia further spoke about a match, a moment she will always remember.
“Is there any match or any moment in your career that you’ll always remember and cherish?”
The cricketer elaborated, “every match is memorable. Though the past year was something that I’ll just take in my stride, what I cherish the most is the fact that my team has the trust on me. My coach comes and speaks to me when things don’t go my way.”

“The challenge of opening the innings for the team you represent?”
Jasia said that “opening the innings requires a lot of will power. It needs you to analyse how the pitch will play. Who will open the bowling. Would it be an in-swinger or an out-swinger? To open the innings needs one to adjust. One needs to be patient. However, it depends from person to person.”

And then came the most talked about Women’s IPL.
Your thoughts on the Women’s IPL?
“IPL brings out so many hidden talents. It gives people recognition for their talent. They get the identity that they have been longing for. Each team gets so many games. Each player gets so many chances which is not possible during an international tournament. The ones who have the caliber get the opportunity to come to the forefront.” Just like every fan, every player also looks upto someone or the other in their field. For Jasia it’s been the master blaster and Hitman. When asked about her idols, she said “I’ve always respected Sachin Tendulkar and Rohit Sharma. I also love Harmanpreet Kaur who has played along with me for Punjab. I have good memories with her especially when she gave me the opportunity to open and I scored well scoring a half century.

She gives credit to Kaur for her opening slot. She believes that she is a hitter and that opening the game has had an impact on her career on the whole.

Jasia Akhtar also called by the name of “Jassi” by her teammates dreams to play for the nation. She is already represented India Red and is a symbol of passion, intent, hard work and character.

She is a woman who has seen a lot being at stake and yet faced the challenges only to be able to be where she is today. No journey is ever like a garden blooming with flowers and to enjoy the spring followed by summer one has to embrace the darkness and coldness of winter! We hope to see the first of the very first to soon be in the color blue living her dream.