Played in Mulapadu, Andhra Pradesh, from 3 January to 6 January, Challenger Trophy 2018-19 was televised on Star Sports. The tournament missed big names as key players were given rest by the selection committee. This gave young talent to showcase their talent and the matches being televised was also a big boost for them. India Red led by Shikha Pandey lifted the trophy. This would have helped her to gain momentum before making comeback in the Indian team on their tour to New Zealand in February. The competition did not see many runs being scored but there were some impressive performances at crucial times. 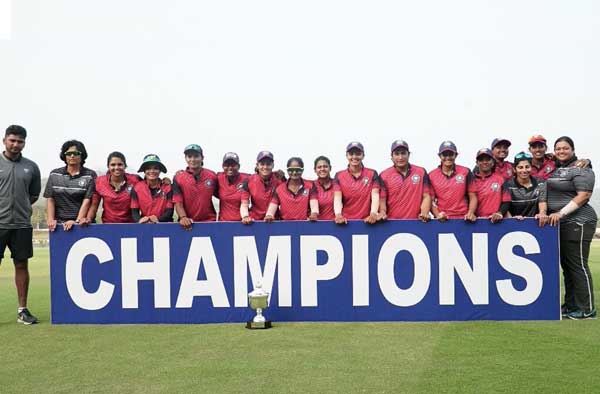 1. INDIA RED VS INDIA BLUE- 3rd JANUARY
Chasing a target of 130 runs, India Blue faced a sudden collapse with captain Punam Raut getting out on the very first ball. India Red was at 24-8 at one point, credits to Komal Zanzad, Radha Yadav and Tarannum Pathan’s bowling attack until Manali Dakshini turned around the game with her unbeatable 49 runs when half of the team failed to score even a single run. Manali and Tanuja kanwer partnered for 9th wicket for 58 runs. India Red won the match by just 1 wicket.

2. INDIA BLUE VS INDIA GREEN- 4th JANUARY
Manali Dakshini again shined for India blue but this time with the bowl by taking 3 wickets and India Green were all out for 149 in less than 45 overs.  Loose fielding by India Green and runs scored by BS Fulmali and Priya Punia led India Blue seal an easy win by 6 wickets to make their way into the finals.

Also Read:  Tanuja Kanwer's heroics with both bat and ball help Himachal win over Jharkhand in Round IV of Super League

3. INDIA RED VS INDIA GREEN- 5th JANUARY
The match between India Red and India Green was to decide the second team to be playing finals against India Blue. Harleen Deol along with Veda Krishnamurthy and N Anusha led India Red to put up a total of 199 on scoreboard. Harleen became the first player in the series to score a half century. Later, Tejal Hasabnis and Dayalan Hemlatha scored half centuries for India Green but couldn’t clear the way of their team to the finals. India Green were all out on 189 with 2-2 wickets taken by Shikha Pandey, Komal Zanzad and Radha Yadav from India Red.

4. FINALS: INDIA RED VS INDIA BLUE- 6th JANUARY
Batting first, India Red set a target for India Blue to chase 184 runs. Veda Krishnamurthy remained the top scorer for India red. Chasing down the target, BS Fulmali added 69 runs to her team’s score. However, Captain Shikha Pandey ended India Blue’s dream of lifting the trophy. Her 5 wicket haul made her only the third player in the history of Challenger trophy to take 5 wickets or more. Tarannum Pathan’s 3 dismissals were equally important while defending a low total. As a result, India Blue were all out for 168 and India Red won the title of Challenger trophy.

Also Read:  Punam Raut says that her focus is to bat long for the team, batting position doesn't matter

Manali Dakshini along with Tanuja Kanwer were the stars of India Blue. Harleen Deol for India Red and Tejal Hasabnis and BS Fulmali for India Green were the top batters. Shikha Pandey and Tarannum Pathan’s bowling led India Red to the final win.

It went right down to the wire but India Red held their nerve to win the @Paytm #ChallengerTrophy 2018-19. Here’s the winning moment! #IndBluevIndRed pic.twitter.com/n1VAmiDnMj