Being best in one area is great, but being best in all areas in phenomenal. Kimberley Jennifer Garth, an extremely talented and immensely inspiring All rounder of the Irish Women’s cricket. Born on April 25th, 1996, Garth was the youngest Irish woman to debut for her side (at 14 years, 70 days old) and overall the third youngest (behind Pakistan’s Sajjida Shah and Scotland’s Fiona Urquhart). Garth’s parents were both Irish cricketers as well and one wouldn’t be surprised when she chose cricket too. An ardent sports lover and a complete family and friends person, Kim Garth is someone all the aspiring cricketers should look up to. Idolizing the superman AB De Villiers, we’re pretty sure she’s an idol to many too. 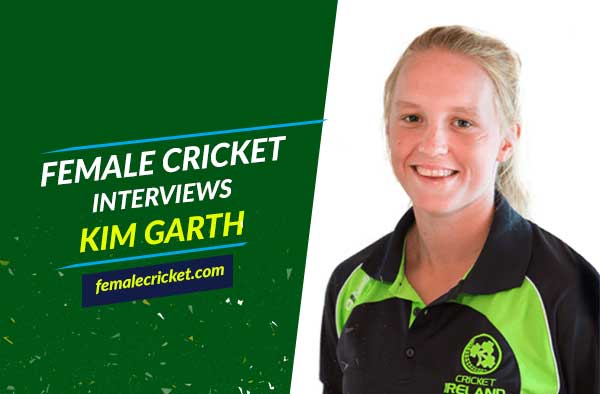 Team Female cricket brings to you the story of this superstar, where in an Exclusive Interview with the Female Cricket team, she speaks about her life story, her game, her interests and everything one had want to know!!

Excerpts from the interview

1) Tell us about your childhood, your initial cricket days and how cricket happened?

Both my parents played for Ireland and I grew up watching my older brother play down at Pembroke Cricket Club. I just went down and joined in at training one day.

2) Your parents have played for Ireland too, what was their reaction when you chose cricket?

I grew up playing a few sports when I was younger with the main ones being football and cricket, but as long as I was playing any form of sport I was very happy. And as long as I was happy, so were my parents!

EXCLUSIVE Interview with Mary Waldron – How a Striker in Football became Wicket keeper in Cricket?

3) What has been your favorite cricket memory so far?

Getting my first cap was pretty special, but I love playing at home against the best sides in the world – so the T20 series against Australia in 2015, and the series against South Africa in 2016, were both quite memorable as we played some really good cricket as a team in both series. Winning the Women’s Big Bash with the Sydney Sixers was also incredible, and something I never dreamed would happen.

4) With the Women’s T20 World Cup coming up, what are the areas you’re particularly working on?

I’ve been injured for the majority of 2018, so I am just working on getting my consistency back with my bowling as well as working on some variations.

5) How important do you think is the role of an All – Rounder in cricket?

All rounders are absolutely crucial in any team and are so valuable nowadays.

6) Nothing comes easy for the successful. Tell us about a few incidents that tested you?

Being injured is never easy for anyone. Due to an injury I have played the majority of the 2018 season as a batter when I’m primarily a bowler. This been a lot more frustrating than I thought it would be!

7) Had cricket not been a thing, what else could have been your profession?

I have a Degree in Sports Management, so probably something along those lines.

8) When you made your international debut, you were the youngest Irish Woman to have done so. What were the feelings back then?

I was obviously hugely excited to be playing for Ireland but didn’t really think about how young I was. I was just focused on making sure I could contribute to the team in whatever way possible.

9) The World Cup will be having the best competitors. Which is one side in particular that you’re really looking forward to?

Australia and England have been pretty dominant in recent years. It’s nice to play against the best in the world, so I’m looking forward to playing that first match against Australia.

10) Who is your Idol and how have their traits affected you?

I love how AB de Villiers bats and I’ve always really admired him as a cricketer. I also love how Ben Stokes goes about his game.

11) Where do you see Ireland cricket in another 5-6 years?

In the Women’s Championship and hopefully ranked in the top 8 teams as well.

12) Women’s cricket has started to get the attention which was so due. How do you feel about that?

It’s a very exciting time for Women’s cricket and also women’s sport in general. I think Australia are really leading the way in terms of marketing the game and succeeding in growing the profile and attendance of the game. Hopefully more countries around the world can model that.

I was pretty competitive growing up and so always wanted to be doing everything – bat, bowl and field. I suppose that determination stuck with me through the years! In recent years my bowling has taken over, however and I’m now primarily a bowler and lower order batter.

14) Besides cricket, what are your other interests?

I like catching up with friends and watching and playing other sports especially football and Gaelic.