Sophie Molineux heroics once again proved that her arrival in the world cricket is just the beginning as Australia goes 1-0 up in the T20 series. Whereas Ashleigh Gardner and Alyssa Healy’s Half century in the first inning mostly closed the doors for the Pakistani team to win the match. 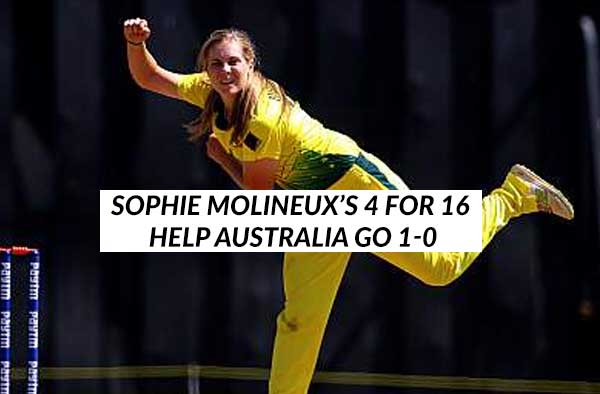 21 years old top order batswoman Omaima Sohail from Karachi got opportunity to wear the green for the first time. Well a perfect day to play cricket with a sight of green hills in background began with Australia deciding to bat first.

Beth Mooney who batted in the middle order in ODI’s got to open with Alyssa Healy and they both smashed balls in every corner of the ground from the very first over . They took full advantage of the field restrictions , hitting a boundary in almost every over and they both tasted the joy of hitting a Six in the last over of power-play where they took on Nashra Sandhu taking the total to 57 without any loss . The destruction continued for another over after which Nashra got Mooney LBW in the 8th over but that didn’t stop the Australians as Gardner took charge from Mooney . It looked as if Alyssa Healy and Ashleigh Gardner had started their innings from last ODI , they had shown great consistency throughout the tour.

Runs kept on coming at the same run rate , even Sana Mir looked off color as she got smashed over 11.50 runs per over. This time around Healy failed to clear the fence on Aliya Riaz’s ball in the 12th over and got caught by Muneeba, she made 59 off 35 . Now Gardner started taking on hard , first she hit Anam Amin for a Six in the next over then 5 fours in next three which includes 3 consecutive boundaries to Aliya Riaz. Captain Lanning got out cheaply. After which Villani finished the innings on high with Gardner, they took 17 in the last over setting 196 runs target for Pakistan.

Pakistan was under pressure of such a big target and they lost Muneeba in the first over itself . She got stump in a strange manner which reminds us of Sachin Tendulkar’s dismissal in the 96 World Cup. Captain Javeria began with a boundary and showed some intent to dominate the bowlers but she disappoints all of us , got caught and bowled to Sophie Molineux . Up next was debutant Omaima Sohail and my god she looks promising, showed two brilliant straight bat drives , a straight and a cover. She made 57 run partnership with opener Nahida Khan who made 43 off 32 and it was once again Sophie who got the breakthrough, she bowled Nahida. After this all others did some slogging and got out early , Aliya Riaz got 19 and Pakistan only managed to reach 131 , 64 short of destination.

Sophie Molineux took 4 wickets only giving away 16 runs provided that she bowled in every scenario of match and she was adjudged as Player of the match.

We all are aware that the T20 World Cup is just 2 weeks away and keeping that in sight this series is very crucial for both the sides . They can take momentum forward from here .
Australia looked brilliant overall , they got all bases covered. They got quality pace attack , got brilliant spinners Sophie, Wareham and Gardner. It will be good if they test their bench strength is next two matches . Whereas a lot of questions hover around Pakistan , they over rely on their spinners and top order and they are short of time but hope they will find some solution pretty soon.

Next match will be held on the same venue on this Saturday.