Talent is something that supports, motivation drives and hardwork pays off. But inspiring people is what makes you a better human being and a successful personality and not everyone can do that. Mary Waldron is a superstar in every field. And on the field, literally. Born on May 5th, 1984 this Irish lady has represented her country in football and cricket both and displayed some really strong character and reflected what success really means. A striker in football and a wicket keeper in cricket, Waldron has truly dedicated herself to sports and has inspired so many.

Sports not only develops a player or is great for fitness but it designs, illuminates and gives birth to a character. A character, an idol people want to look up to. In this journey of hers, Mary Waldron has truly become someone the people with dreams want to look up to. In an exclusive interview with Female Cricket, Waldron takes us through her life journey, her quest between football and cricket and how she became what she is today. 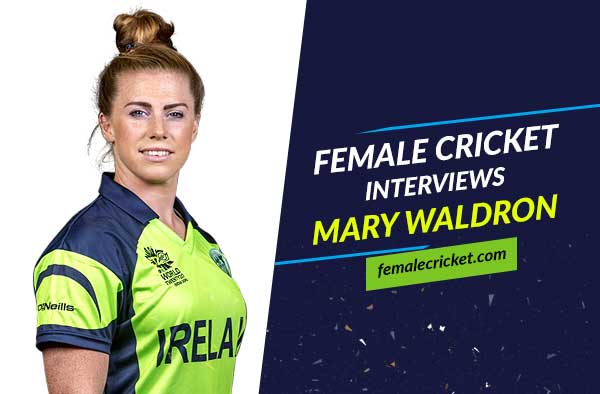 1) Tell us about your childhood, family and initial cricketing days?

I come from a big family. I have 3 brothers and 2 sisters. We lived in the country so spent a lot of time outdoors. We are sporting family but I’m the only one who plays cricket.

2) You’ve played football professionally. When and how did cricket happen?

I played football in the garden every day growing up. I joined my local club at about 11 and played for Ireland under-age teams from the age of 13. When I started playing cricket it was socially. I then became a wicket keeper and my cricket career took off. I made my Ireland debut a year later and I haven’t looked back.

3) Is there anything from football that you apply in your cricket as well?

Growing up playing football I had good fitness and agility. But being part of a team from an early age and playing at a high level I knew the demands of international sport and how important being a good team player is.

4) Whom do you idolize and how have they affected you as a player and a person?

When I played in Tasmania, I worked with Julia Price. She played for Australia and has worked really hard with me on my technique with both keeping and batting. She is now a very good friend and I would go to her with any issues.

5) Your role in the team is that of a wicket keeper majorly. Were you always a keeper?

I wasn’t always a keeper – I was a specialist fielder for about 4 years! Our club wicket keeper went away for the summer for work and I was chosen to be the keeper (mainly because I wasn’t scared of the ball, I think). Ciara Metcalfe was the captain at the time so I have to thank her!

6) How did your family react when you chose cricket after playing football professionally?

My family didn’t really say anything – I think they were a bit confused to be honest. They are now fully behind my career and my parents follow the team everywhere!

7) Which has been your most favorite cricket memory so far?

Playing in the last World Cup in India was brilliant. It’s an amazing experience to play in the big stadiums. I stayed on to travel a bit after and I went to an IPL game and I was so proud that I had played out on the square a few weeks previous.

8) Besides cricket and football, what all other sports do you play?

I played Basketball and volleyball in school. Club hockey for about 15 years and I tried a bit of rugby.

9) If cricket and football didn’t exist, what would have been your profession?

10) With the Women’s T20 World Cup coming up, what are the particular areas you’ve been working on?

I’ve been doing a lot of work on my keeping and getting a lot of volume in. Our Fielding coach Fintan McAllistar has been doing some extra evening sessions for me. And batting I’ve been working on playing spin.

11) Women’s cricket is now getting the attention it has always deserved. What are your views on that?

I think women’s cricket and all women’s sport deserve so much more attention. We have just started a campaign in Ireland around women’s sport called 20×20.

Women’s sport should be covered equally to men without question. I don’t care it doesn’t generate as much profit. It will – women’s sport is full of passion, skill and tactics. I also think that men’s sport has come to rely too much on strength so people will really enjoy women’s sport if they gave it a chance or were given the chance to watch it. 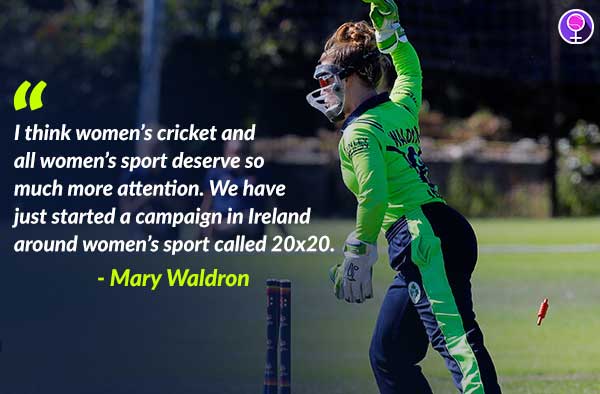 12) What or who inspires and motivates you during rough phases?

I believe I can be better and get better. Knowing that I still have the ability to improve keeps me going. Or maybe a chat with Julia!!

13) Do you still play football?

I played last summer as we had a quiet international schedule. But unfortunately I don’t have the time with a full time job and cricket. I haven’t properly played in about 5 years.

14) Besides cricket and football, what are you other interests and passions?

I really enjoy spending time with my friends and going for coffee. I have a little dog called Ashi who I also like to spend time with.

15) Where do you see Ireland cricket in another 5-6 years and how do you think you can get there?
I think we can get another few rankings higher. However we will only get there with playing more cricket. I really believe ourselves and Bangladesh need to be part of the championship.

Our mindsets and self belief also needs to rise – we have some very talented Cricketers and we need to show that.