Born in a middle-class bengali family at Chakdah in Nadia district of West Bengal on 25th November 1982, Jhulan Goswami is a name that needs no introduction today. Inspired by Sachin Tendulkar in 1992 World Cup, Jhulan took up serious cricket after meeting her first Coach – Swapan Shadhu. Cut to 2018 : She has won ICC Women’s Cricketer Award; became captain of the Indian Team; world’s fastest bowler; highest wicket taker – are some of the accolades and milestones from her prodigious career.

It’s been more than a year since the Indian women’s cricket team lost the World Cup at the Lord’s by just 9 runs – but the loss to England in the finals is definitely hard to forget. India’s pace spearhead Jhulan Goswami, who was part of the team, cannot forget it either. 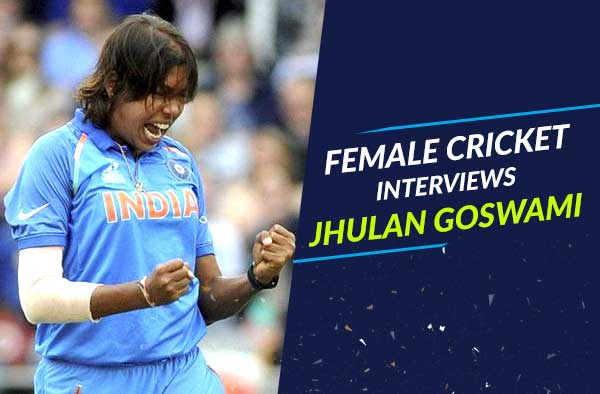 Excerpts from the interview

How did cricket happen? Walk us through your initial cricket days?
I used to spend lot of time with my cousins in childhood. They were involved in different sports and I loved that. I used to enjoy their activities. We watched lots of matches together. It’s for them that I started loving sports in general. Then gradually I started taking part in school sports, discussing with friends and thus got involved with cricket. And after watching Sachin Tendulkar in 1992 world cup, I totally fell in love with cricket.

When did you think of considering cricket as a profession?
Just after one month of joining the cricket academy at Vivekananda Park, I got a chance to be one of the ball girls during the 1997 cricket world cup final between New Zealand and Australia at Eden. I saw Belinda Clarke’s double century and the whole experience motivated me very much. I finally realized that I would love to take up cricket as profession and represent my country. I think that match was the key factor.

Also Read : Who said what after Jhulan’s 200 Wicket milestone?

Did your parents accept the idea of cricket? What was the scenario at home?
For a middle class family who had hardly any idea about women’s cricket, it was obviously not easy. My family had no connection with sports. They didn’t know about the history of women’s cricket. In a Bengali middle class family, a girl is expected to be involved in extracurricular activities like dancing or singing apart from education. So what I wanted to do was ‘unusual’. I tried to explain them and gave them a clear picture of why I took the decision. Moreover, distance between Chakdah and Kolkata was not easy to cover as a school going girl on regular basis. There was also no professional guarantee as well. This is not like completing your education and getting a normal secure job. Insecurity and uncertainty are huge in the career I chose back then. So my parents were not convinced for all these obvious reasons.

But finally it was possible for my coach Swapan Sir that my parents were convinced. When I shared my problems with him, he listened to me carefully. Then one fine day he came to my house at Chakdah and talked to my parents. He made them understand about the future possibilities. This is true that family support is very important and I am glad that my parents finally showed faith in me. But today I understand them. From their point of view it wasn’t easy.

What about your studies? Wasn’t it tough to balance both academics and sports?
It was definitely not easy. I was merely 14-15 years old when I started coaching at Vivekananda Park. Initially I had coaching on Thursdays, Saturdays and Sundays. Weekend wasn’t tough to manage but I had to bunk school on Thursdays. It wasn’t tough at beginning but later I used to attend camp four five days in a week. My school was very supportive when they came to know about my cricket coaching. My teachers helped me a lot so that I didn’t have miss studies much.

Tell us about your first coach?
He is Swapan Sir, a very honest and disciplined person. He was a very strict coach. But at the same time he used to encourage whenever someone performed well. He used to motivate us with token gifts. He made us realize the value of commitment and challenge. I still can relate to few of his words even now. In fact, Swapan Sir insisted me to focus on my bowling.

Any memorable performance of yours, if you had to pick one?
Whenever India performed well it made me happy. Taunton was definitely special; India’s first test win in England which led to first series win. 2005 World Cup Semi-final was a memorable match as well and we played really well. At times small contributions lead to big wins so you can’t specify only the big performances as memorable match.

When you started journey way back in 2002, did you ever feel you will get to lead the Indian team? How was the experience?
It was a very enjoyable experience and huge honor for me to lead my country. I always tried to lead from the front and take the team to the top. I never thought that I would become a captain but I thoroughly enjoyed it.

Tell us about both the World Cup Experiences?
Two Runners up performances in 2005 and 2017; the main differences were media coverage and public support. Earlier, IWCC was really passionate about Women’s cricket but they had no sponsors, but in the last World Cup ICC promoted the tournament really well. Yes we could not cross the finish line those two times but win and loss is not in anyone’s hand. When you reach Semi-final or final of such big tournaments, it is all about that particular day; how you hold your nerve, weather condition, different circumstances and lot of other things.

The entire country and fans wants to see you in the 2021 World Cup as well. What’s your say?
It’s not easy to say right now. Being a medium pacer, injuries are quite a regular thing and hence difficult to commit how long I can continue. But as long as I will play I will give my best.

How does it feel to be a bowler in batter dominated game?
Once I asked my coach why he insisted me to become a bowler. According to him, in his 15-16 years of coaching tenure he rarely found another student of his with such a smooth high arm action. That’s why he decided to develop me as bowler. There are challenges attached to it. Being a bowler makes you injury prone, at the same time, this is probably the most challenging sector of cricket. Bowlers are given a limited condition where they have to perform according to that situation. In recent times, the fielding restrictions and other rules are making it tougher. However we have six deliveries in an over and it gives us a chance to make comeback.

After a long due, women’s cricket is receiving all the limelight it actually deserved. Your take on that?
Although there was some local and national media coverage post my debut but it has definitely increased after the ICC Women cricketer of the year awards. And now since last world cup people now follow and watch women’s cricket more. They want to know about the players now. So fan following has increased for women’s cricket in general.

In this Jhulan Goswami interview, read below to know about the changes that came in Indian cricket team after WCAI merger with BCCI

There has been a tremendous growth and changes in the women’s cricket landscape – your thoughts?
I think the major difference can be seen in the infrastructure. Post 2006, since BCCI took control of the women’s game there has been big improvement in all the aspects. Now we have better support staffs, the quality of ground and umpiring have also improved. Now more sponsors are involved with more media coverage and promotions. When BCCI is taking the game to the grassroots level nothing can be better than that. It’s a smooth transition however keeping in mind the socio-cultural structure of our country the growth is relatively slow but commendable. Where does women’s cricket in Bengal stand now?
Bengal cricket scenario is also improving. CAB is arranging district level tournaments. But more matches are required. Club cricket can be introduced. Coaches from Kolkata can visit some of the districts to identify and train talented players from grass root level. But the best part is that more girls are coming to play and parents are also more supportive now. Vivekananda Academy in Kolkata has at around 85 women cricketers right now. Things are certainly improving

In this Jhulan Goswami interview, read below to know more about Jhulan’s retirement plan:

Retirement from T20; Will it have an impact on the team in upcoming world cup?
It was not an overnight decision. I was considering it over the recent times and took the final call during the Women’s Asia Cup in Malaysia. I do not think this will have an impact on the team performance. This is a very balanced side. Now Mansi Joshi is back, and so she and Shikha Pandey can lead the bowling attack along with the spinners Ekta and Poonam Yadav. What are you views on Women’s IPL?
This is the right time to launch women’s IPL. If Women’s Big Bash league and Kia Super League can be successful, there is no reason for women’s IPL not to be successful in India. At least we can start with six teams and involve foreign players like men’s IPL. The exhibition match we played last year was really exciting; viewership and crowd will eventually grow once we start the league. I really hope BCCI is working towards launching women’s IPL in next few years.

What do you think of the current Indian squad? Do you think the youngsters are ready to take on the world?
I think Indian cricket is in good health. There are many talented players in the team now. For any young cricketer my tips will be to continue hard work and be disciplined. Once you are selected for Indian team that means you have enough potential. After that it is all about training and proper guidance that will take you to the next level.

How does it feel to have achieved so much?
I never thought of this much when I started playing. All I wanted to bowl at least one over for India and take a wicket. My challenge was to make my parents proud. I think I have been able to do that.

How excited are you for your biopic?
Very much. I was receiving offers and finally it is happening. I hope my story will be able to inspire young girls to take cricket as a career option.

Any post retirement plans?
I haven’t thought of it yet. I’ll see how everything goes and take a decision at the right time.

How do you wish to see women’s cricket after ten years?
I wish girls will have a huge fan following and they will be mobbed. I wish more girls will come to play. I wish parents will be more enthusiastic as well. I do wish a flourish future for women’s cricket in our country and overall.