Let us look at one of the six teams, team Tornadoes and its players. 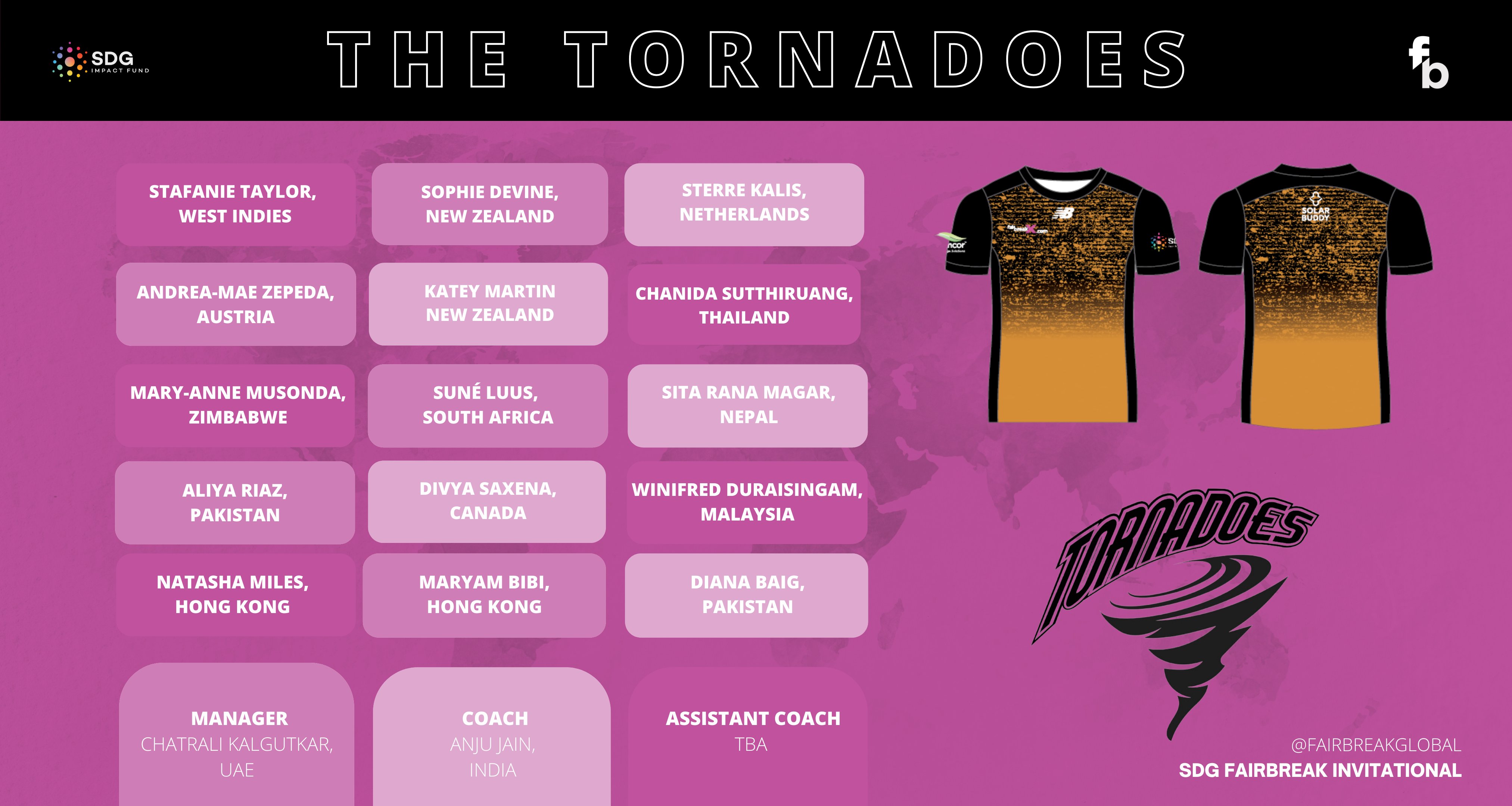 Players to Watch out

Some of the players to watch out for from this team will be Stafanie Taylor, who will lead the side. Taylor is an experienced all-rounder, who recently led West Indies to the semi-finals of the World Cup. There is Sophie Devine and Sune Luus, who are among the world’s best all-rounders. There is also Diana Baig, who is an impressive fast bowler and gun fielder from Pakistan and her country mate Aliya Riaz, who is a genuine all-rounder. Katey Martin from New Zealand also forms a part of the squad. Martin is an attacking middle order batter and one of the safest houses behind the stumps.

The captain of the West Indies is one of the most experienced players in the world of women’s cricket with over 200 international matches under her belt. She is a right-handed batter and a right-arm-off spinner. She has scored over 8000 international runs and picked up more than 200 international wickets.

She is the captain of the White Ferns and one of the best all-rounders in the world of women’s T20Is. She is a right handed opening batter and a right arm seamer. She has featured in more than 100 T20Is and has a wealth of experience. She has muscled over 2500 T20I runs and has 98 T20I wickets.

The Dutch all-rounder is an upcoming talent, who has the ability to contribute with both bat and ball. She made her international debut in 2018 and since then has represented the Netherlands in 17 T20Is. The right hand batter has scored 556 runs, including one century and two half centuries. With the ball, the right arm speedster has four wickets.

She is a dashing all-rounder from Austria. With an experience of 19 T20Is since her international debut in 2019, she has been a key member of team Austria. She has scored 563 runs and has a T20I century to her name. With the ball, she has scalped 10 wickets.

She is a right handed middle order batter and a wicket-keeper who plays her international cricket for the White Ferns. She is one of the veterans of the game having been around at the international level since 2003. She has played 95 T20Is to date and has close to 1000 T20I runs, including four half centuries.

She is one of the most experienced all-rounders of Thailand having played 42 T20Is since her debut in 2018. The right handed batter has plundered 390 runs at a strike rate of more than 90 and with the ball she has 43 wickets, including one five-wicket haul, bowling right arm seam.

The captain of Zimbabwe became the first female cricketer of Zimbabwe to score an international century. She achieved the feat against Ireland last year. She is a right handed batter and has featured in 8 ODIs and 21 T20Is so far, after making her international debut in 2019.

She is one of the best all-rounders in the South Africa team. Recently, she captained South Africa to the semi-finals of the ICC Women’s Cricket World Cup. She has been around at the international level since 2012. She has featured in 83 T20Is. The right handed batter has mustered 866 runs, including four half-centuries and has accounted for 47 wickets, including two wicket-hauls, bowling right arm leg spin.

This all-rounder from Pakistan is an experienced campaigner having been around at the international level since 2014. She has played 48 T20Is to date, scored 544 runs and picked up 17 wickets. She is a right handed middle order batter and a right arm seamer.

Having made her international debut in 2021, this talented all-rounder has represented Canada in six T20Is to date. She has registered 180 runs, including one half-century and scalped two wickets at an economy of under three.

She is the captain of Malaysia. She is a right handed batter and a right arm seamer. Since her international debut in 2018, she has played 27 T20Is, scored 363 runs, including one half-century and picked up 18 wickets, including the best of 3-10.

She is a good all-rounder from Hong Kong. She is a right handed batter and a right arm medium pace bowler. She made her international debut in 2021 and since then featured in five T20Is. She has scored 127 runs at a healthy strike rate of 100 and has the best score of 40 not out.

She is a right arm seamer, having made her international debut for Hong Kong in 2019. She has represented Hong Kong in nine T20Is and has accounted for two wickets. Recently, she featured in the ICC Women’s World T20 Asia Qualifiers.

She is a right arm pacer, who plays her international cricket for Pakistan. She is a new ball bowler and was impressive during the recently concluded ICC Women’s Cricket World Cup in New Zealand. She has been playing international cricket since 2015. She has featured in 28 T20Is and accounted for 23 wickets.

She is a former captain of the Indian women’s cricket team, who played international cricket between 1993 and 2005. She featured in eight Tests and 65 ODIs. Later she pursued cricket coaching. She has been associated with the development of youth and women’s cricketers of Andhra Pradesh, Odisha, Tripura and Assam. She also coached the Indian team between 2011 and 2013. In 2018, she was the head coach of Bangladesh Women Cricket Team and led them to their first ever win in the Asia Cup. In 2021, she was appointed as the head coach of Clontarf Cricket Club in Dublin.

She is a former UAE cricketer and at present the coach of UAE women’s cricket team. She was born and brought up in India but later moved to the UAE. Apart from cricket coaching, she works in the aviation industry.