Let us look at one of the six teams, team Barmy Army and its players.

Some of the players to watch out for from this team will be Deandra Dottin, who is an attacking opening batter, and Shemaine Campbelle, who is a steady middle-order batter. There is also Fatima Sana, who is a young pace bowling sensation from Pakistan, and Rumana Ahmed, who is one of the leading wicket-taker for Bangladesh. 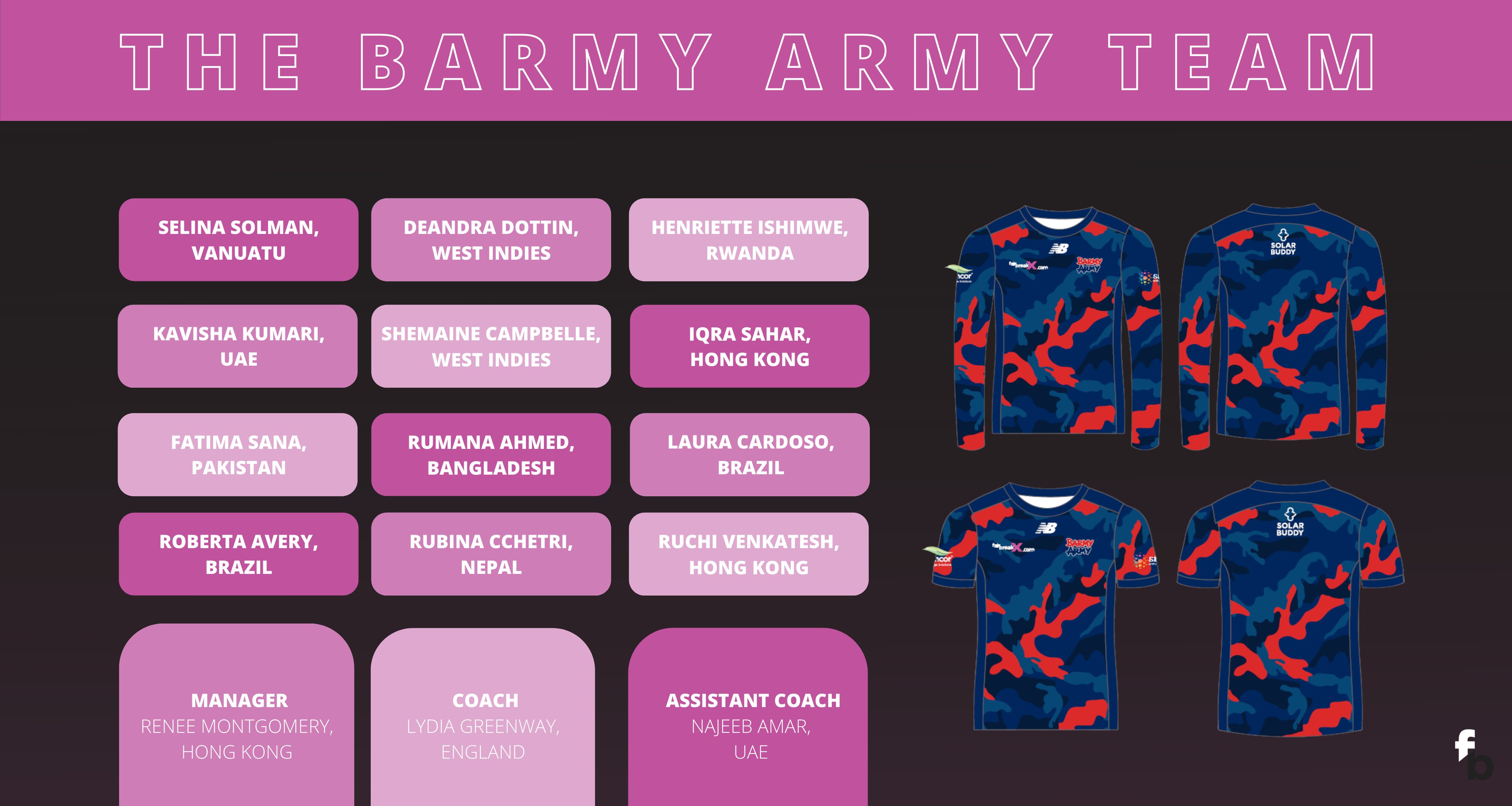 She is the captain of Vanuatu team. She has been a part of Fairbreak since 2016. She won the player of the match in the first Paul Getty XI fixture in Wormsley, UK. At the international level, she has featured in 11 T20Is, scored 99 runs and picked up 11 wickets. She is a right-handed batter and a right arm seamer.

The star all-rounder from West Indies is a swashbuckling opening bat and more than handy right arm seamer. She is a seasoned campaigner having played 124 T20Is, scored 2681 runs and picked up 61 wickets. She has been playing international cricket since 2008.

She is a right handed batter and a right arm speedster from Rwanda. She has featured in 31 T20Is since her debut in 2019. She has scored 260 runs and picked up 24 wickets.

She is a young all-rounder from the UAE. She is a right handed batter and a right arm off spinner. Since her international debut in 2018, she has featured in 23 T20Is, muscled 517 runs at a strike rate of 117.76 and picked up eight wickets at an economy of under five.

She is a right handed batter and wicket-keeper from West Indies. She has played more than 100 T20Is and scored 852 runs. Apart from being a wicket-keeper, she can bowl right arm medium pace occasionally.

She is a talented right arm seamer from Hong Kong. She made her international debut in 2021 and since then has played four T20Is. She has scalped four wickets in as many matches, including the best of 2-18 and has an economy rate of five runs per over.

The right arm speedster from Pakistan will join her countrymate Sana Mir in the tournament. She made her international debut in 2019 and since then has represented Pakistan in 22 international matches, including 15 ODIs and 7 T20Is. She has scalped 28 wickets. Apart from her bowling she is more than a handy lower order bat. On the back of her good performances, she has been nominated for 2021 ICC ODI Player of the Year.

She is a right handed batter and a right arm medium pace bowler who has played six T20Is for Brazil. She has scored 26 runs and picked up 11 wickets in T20I cricket so far.

The Brazilian all-rounder has been playing international cricket since 2018. She has featured in 16 T20Is. The right hand batter has mustered 608 runs, including one half century. The right arm speedster has accounted for 15 wickets, including the best of 3-1.

She is a good all-rounder from Nepal. She is a right-handed batter and a right arm medium pace bowler. She became the captain of Nepal in 2012. She also holds the record of being the first cricketer from Nepal to bag a hat-trick in women’s T20Is. To date, she has featured in 15 T20Is and picked up 13 wickets.

She represents Hong Kong at the international level. She is a right arm off spinner, who has picked up eight wickets in 18 T20Is. With the bat, she is more than handy. She has scored 74 runs in 14 innings at an average of 11. Though she was born in India, she immediately moved to Hong Kong, where she was raised.

She is a former England cricketer, who played international cricket between 2003 and 2016. She played as a left handed batter and an occasional right arm off spinner. She played 14 Tests, 126 ODIs and 85 T20Is for England. After hanging up her boots from playing international cricket, she took to coaching. In January 2017, she announced the launch of Lydia Greenway’s Cricket for Girls, which is aimed at coaching females of all abilities and ages.

He is a Pakistani-born Hong Kong cricketer who played four ODIs and one T20I between 2004 and 2014. He played as a left arm spinner and a left handed lower order batter.

She was born in India but settled in Hong Kong several years ago. She is a big cricket enthusiast and used to play gully cricket in India. She played as a right-handed middle order batter for Hong Kong in one day games. She took to umpiring post retirement and has officiated T20 matches in Hong Kong.