It was the most awaited day of ‘WOMEN’S SMASH T20 2019’.It was this very day for which the teams had been fighting so tough throughout the tournament. Every team had tried their level best to make through every matched played by them, but as it is always said – “May the best team always win.” 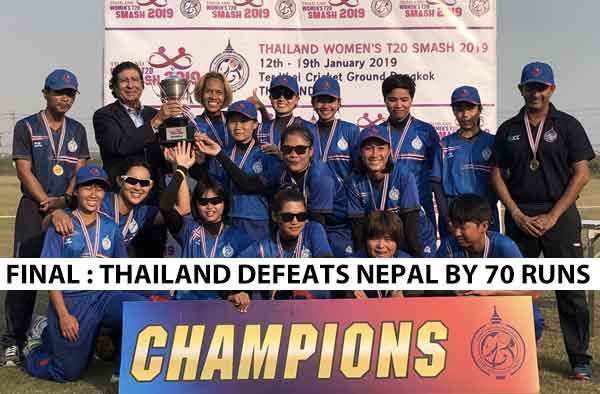 The matches played today were-

3. Malaysia Women vs Thailand A Women

Indonesia Women won the toss and elected to bat first.They put up a score of 52 all out in 19.3 overs.The team didn’t give a good batting performance. They were slowed down in the run making process and lastly got restricted to a low total.A steep graph of falling wickets had got hold of  their innings, making it tough to add runs as no partnership sustained for long.UAE Women were easily able to achieve the given target in 8.3 overs at a loss of 1 wicket. CR Seneviratna had did a job with the ball(4 overs,2 runs,4 wickets,2 wickets).

Hong Kong Women won the toss and elected to field first.Myanmar Women who were to bat first put up score of 46/8 in 20 overs.Hong Kong Women chased the target of 47, which was a very easy one, quite comfortably in 8.1 overs at a loss of 1 wicket. It seemed like a warm up match for the Hong Kong team who were simply converting all the efforts of the opponent team to easily snatching in runs; of course, the target was also so small to be able to bring the other team under pressure.Moreover,Myanmar had given a lot of extras, which made the task even more tough.On the whole, it was an easy win by Myanmar who had been fighting with all their efforts all this while to have continuous wins.

Malaysia Women vs Thailand A Women:13:30(local time) at Asian Institute Of Technology Ground,Bangkok

Malaysia Women won the toss and elected to bat first.They put up a score of 133/3 in 20 overs.They really displayed a fabulous batting performance, which had good batting partnerships, match presence, skilful observations and good use of opportunities whenever they felt like. WA Duraisingam was the face on the batting side who hit 56 runs in 59 balls.Thailand A Women, who were to chase a target of 134 in 20 overs, were all out on 49 in 17.1 overs.Malaysia Women were not just excellent in batting but were fabulous on the fielding side too.It was a completely dominating performance by them; performances like this, which have also been seen earlier in this tournament..

Nepal Women won the toss and elected to field first.Thailand Women who were to bat first put up a score of 121/1 in 20 overs.This was an exceptional one from the Thailand team who set a very good score at a loss of just one wicket.The best performer with bat was – N Chantam(69 runs).Nepal Women who were to chase a target of 122 runs in 20 overs were all out on 51 runs in 17.2 overs.The team got restricted on about half the score they had to chase for.It seemed like chasing this time was not the right option or the Thailand Women had a different attacking plan for the finals.It was a smart and strategic play by the Thailand team who were so powerful on the batting side; analysing the key areas and building the innings with the previous experience on this ground and the teams this long and the equally attacking bowling by them which was strategically as well as smartly executed! Patience, self belief and hard-work lead them to finally get what they were fighting for and what more can one be proud of ,when the win is on their own soil!