Shafali Varma has been the talk of the town ever since her debut 2 years ago. She proved her worth in the ICC T20 World cup last year and now started her Test career with a bang but smashing two half-centuries in her first match.

In the T20 World Cup, she was the highest scorer for India and became the youngest Indian female cricketer to play in a T20 World Cup final. She scored 163 runs at a strike rate of 158.25.

The ICC T20 batting ranking topper has proved to everyone that at such a young age she is all ready to play for India in Tests. Being the aggressive opening batter that she is, she almost scored a century in her first-ever inning in Test match but got out on 96, but she managed to break a record with this unfinished century as well.

Her 96-run inning is the highest score made by an Indian women cricketer on a Test debut, 96 runs from 152 balls on day two of the India vs England match. Shafali broke the record of Chanderkanta Kaul who had scored 75 on her Test debut.

Shafali also became the first Indian women cricketer to hit a six on Test debut. It was also only the second six-hit by Indian women in Test cricket. She hit the six off Nat Sciver’s ball.

Indian men’s team fielding coach R Sridhar was in awe of the youngster’s batting and praised her. He also told that the whole men’s team, whenever they had time off from practice, were glued to the television and impressed by the star teenager.

“Shafali, so much reminds us of Viru (Virender Sehwag), doesn’t she? The way she plays and her mindset is so clear, so we are enjoying the innings from Shafali. I wish she had got a hundred in the first innings,” Sridhar said at the virtual press conference after the first day of the World Test Championship final against New Zealand was called off due to rain.

“And well played to both Smriti (Mandhana) and Shafali, what a rollicking start they gave us in the first innings and unfortunately, we couldn’t capitalize on that, but great test match going there,” added Sridhar.” He added.

Youngest Indians to score 50+ scores in both innings of a Test Match: 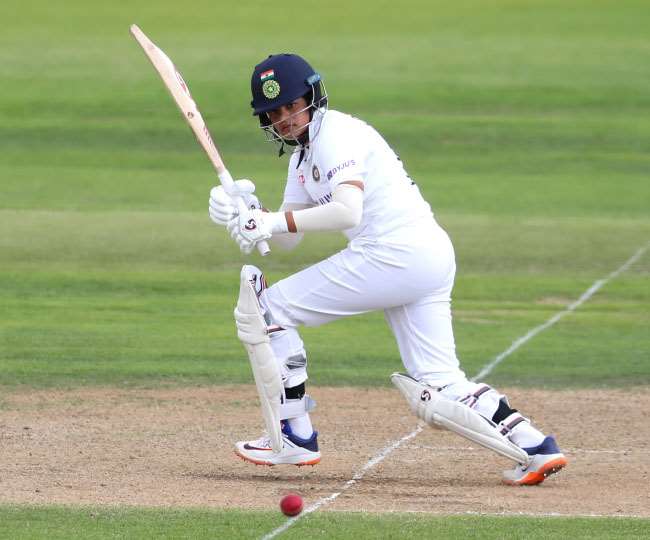 “We have not missed a bit of the girls’ game right from day one. We have almost seen it, whenever we can except for the times we were out for practice. All of us have seen the game, it has been live going on in our rooms, in our team room, in our breakfast area and even today, when we are (were) for the rain to stop, all of us were sitting together and watching the girl’s game and encouraging our girls,” he said.

After the Bristol Test, the India team will play England in 3 ODIs and 3 T20Is. The multi-format tour will come to an end on July 14 in Chelmsford.