The name of Sophia Dunkley will be written in the books of history as she received her maiden test cap at the one-off test against India on June 16 in Bristol which made her the first Black woman to represent England in a Test match.

Born in Greater London, England, Sophia Dunkley started playing cricket at a very young age after her neighbor introduced her to cricket. She was awarded a sports scholarship by Mill Hill and at Mill Hill, she played for the first XI with the boys and was the first girl ever to do so.

All-rounder Sophia Dunkley made her international debut for England in 2018 against Bangladesh at the 2018 ICC Women’s World Twenty20. She has played 12 T20 Internationals since then. She also plays for Surrey in County cricket and South East Stars in the Rachael Hayhoe Flint Trophy.

“Obviously playing Test cricket is a very rare occurrence in the women’s game so I think it’s exciting that people want to see women’s Test cricket,” Dunkley had told the PA news agency.

“It’s a really exciting direction. I know quite a lot of the girls have not played a lot of Test cricket, but to have the opportunity to play the historic game of cricket, it’s very, very exciting. I’ve not played very much in the past, but it’s something that I’d love to play. Obviously, the men get to play Test cricket all the time and it’s such a renowned format of cricket in the men’s game” she added. 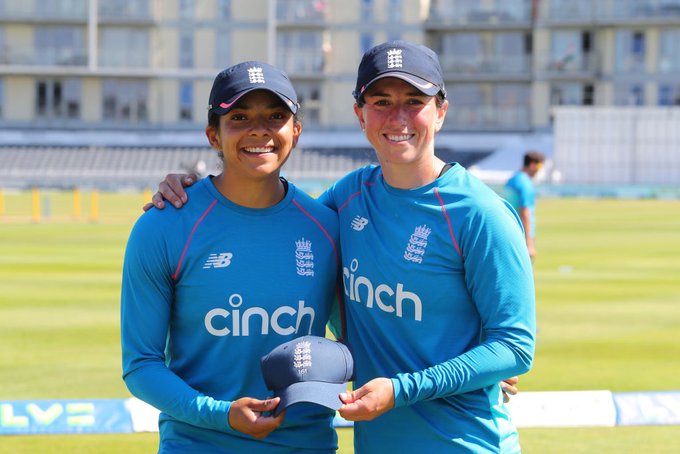 India too had a long list of debutants at the Bristol test. Five Indian cricketers received their maiden Test cap yesterday- Shafali Verma, Deepti Sharma, Sneh Rana, Taniya Bhatia, and Pooja Vastrakar. Two of these debutants, Deepti Sharma and Sneh Rana, proved their worth on the very first day by spinning the ball brilliantly.

Deepti took 3 wickets for 50 runs in 18 overs, which includes 3 maiden overs too, whereas Rana bowled the most number of overs, i.e., 29, and managed to take 3 wickets for the cost of 77 runs with an economy of only 2.7.