Shubhda Bhosle Gaikwad made it to the news when she became the youngest female cricket umpire in India. Shubhda’s uncle has represented Madhya Pradesh at Ranji level and father Ajeet Bhosle was a cricket coach. Hailing from a cricket-rich background, there was no way to stay away from cricket for young Shubhda. Inspired by her brother and equally supported by family members, Shubhda picked up playing professional cricket. However, she soon found her love in umpiring and took up the opportunity after clearing the “Level O” Exam. In an interview with Female Cricket, Shubhda talks about her cricket journey. 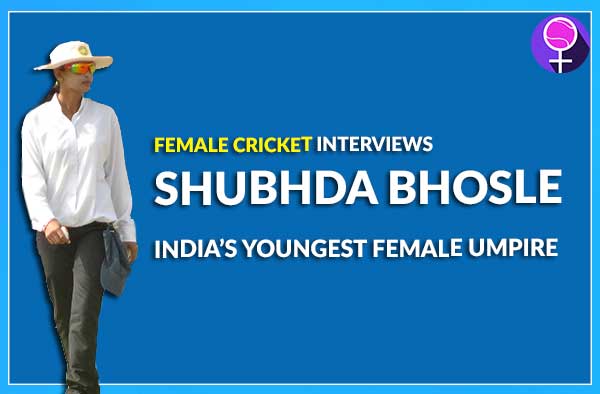 1. What drove you to cricket? Walk us through your initial cricket days?
I belong to a cricket family; my uncle Shrikant Bhosle has represented Madhya Pradesh (MP) team in Ranji Trophy. My father Ajeet Bhosle being a cricket coach encouraged me to play cricket since my early age.

2. Any siblings (brother-sisters)? If yes, were they equally interested in Cricket? Who supported you the most?
My younger brother playing for Vidharbha team influenced me to take up cricket as a career. I also want to mention my husband Sujay, he’s the one who motivates me a lot, I have seen many women players and officials leaving cricket after getting married but Sujay has always encouraged me. His dream is to see me officiating International matches, what more a girl can expect from her life partner.

3. Who were your cricket role model / inspiration whilst growing up?
My father and uncle, they are my role model and they have inspired me a lot. 4. Your uncle was a Ranji cricketer and your father, a cricket coach. Did you still face academic pressure from your parents?
No, I did not face any pressure from my parents regarding academics. Even my academic subjects were also related to sports. I have completed my Bachelor’s and Master’s in Physical Education and now I have almost completed my PhD in Sport Psychology.

Also Read: Young Mansi Joshi made it to the National squad for Women’s World Cup 2017

5. Being from a cricketing family background, how was your childhood and upbringing different from any other child not from the cricketing background?
It makes a lot of difference, right from the beginning, even before the understanding of the game I found myself on cricket ground may be as spectator and later playing the sports. This made the “game” a part of my family.

6. A cricket match you played, and still remember and enjoyed the most? Why?
We were playing against Mumbai, I was batting and the fielder started speaking Marathi with the bowler as they thought I can’t understand the language. I held myself pretending my inability to understand them and kept scoring. Hahahaha… That was fun…I really enjoyed it. 8. When did you develop the interest in umpiring and decided to take it up as a profession?
I always wanted to be in touch with the cricket ground. Umpire is the one, who spends more time on the ground than the cricket players. So when I cleared level 1 exam in 2011, becoming the youngest female cricket umpire in India it was my gut feeling which determined me to continue as cricket umpire till today.

9. You completed your Ph.D from Gwalior. How is the general perception about women’s cricket there?
Gwalior have produced players like Pallavi Bhardwaj and Neha Badvaik who have latter played for ‘India-A’ and Western Railways. People of Gwalior are progressive and keep opinion for sports similar to academics. There are separate women cricket clubs in Gwalior doing quite excellent in cricket.

10. How happy were your family members and friends with your decision?
They were happy. I still remember my father’s expressions when I stood for my 1st board cricket match as an Umpire and when print media was drawn to my house for an interview. 11. Post completing your level 1 course and becoming the youngest woman umpire in India, which was the first match you officiated? How many matches have you officiated so far and when?
J.S. Anand Trophy which is a part of Women’s Senior Division Cricket held at Bhopal in year 2012 was my official 1st match. I have officiated more than 75 matches so far.

12. Umpiring is one of the most difficult roles in cricket and is often underrated. What do you think is the reason?
Not just with cricket but with any other game which is “Sport” or “Sportsperson” concentric making space for umpires is difficult. I do not think Umpiring is underrated at International arena, though neglected and underrated in local and domestic circuits, but things are improving very fast and everything pertaining to administration is getting more organized. Cricket associations these days are more transparent and just than never before. I have lot of hope, positivity and faith in the future of Indian cricket.

Also Read: Other career options for girls in Cricket

13. What do you think are the qualities an umpire should possess?
An umpire should have focus, determination, punctuality, confidence, presence of mind, should be mentally tough and must have ability to handle conflicts. Standing on the ground needs lots of attention, stamina and endurance.

14. What all goes to an umpire’s mind while officiating, and mostly, when the match is in a tight position. How do you manage to keep calm and do justice to the role?
To be very true, it is about every bowler, batsmen, fielder that we have to keep a lot of things in mind to check the rules of the games are followed which adds pressures when matches are fierce or close ties. During tight matches I just take a deep breath and focus on the match.

15. For an aspiring cricketer / individual, what are the steps/ process to become an official cricket umpire today? List down the detailed pathway!
Divisional bodies use to organize level ‘O’ exams for upcoming umpires in every three years, after clearing that you are eligible to appear in Level 1 16. Your views on Female Cricket? Any feedback or suggestion you would like to share with us!
Awareness is making society progressive day by day and with the people encouraging women cricket like media houses like you, more girls will be motivated to play. My only suggestion would be cricketing bodies, media houses and especially schools should reach girls from small towns and villages, may be with local competitions and open tournaments, so as to engage and involve almost every girl with hopes.

• Answer in one word: