Born in the city of Abbottabad, in the conservative society of Pakistan, who would have thought that Sana Mir, a small girl from small city will one day become the greatest women cricketer of Pakistan. Who would have thought that one day she will be the leading wicket taker for Pakistan women’s cricket team in T20I and ODI’s. Sana was only 5 year old when she started playing on streets with her brother. She was passionate towards the game from very early age and continued playing with same momentum. She couldn’t continue her studies because she had to choose either her engineering study or Cricket. She chose to chase her passion and that was cricket. Same passion which led her to represent Pakistan’s women Cricket team same year. Sana made her international debut in 2005 against Sri Lanka. She didn’t take much time to establish her place in the team. She is probably the only women cricketer in Pakistan who have successfully changed the traditional mindset of ultra conservative Pakistani society about women playing cricket. She overcame all the social barriers and proved that a women can do whatever she wants to do. All we need to do is change the mindset of society about women in sports. Sana credits her success to her parents. 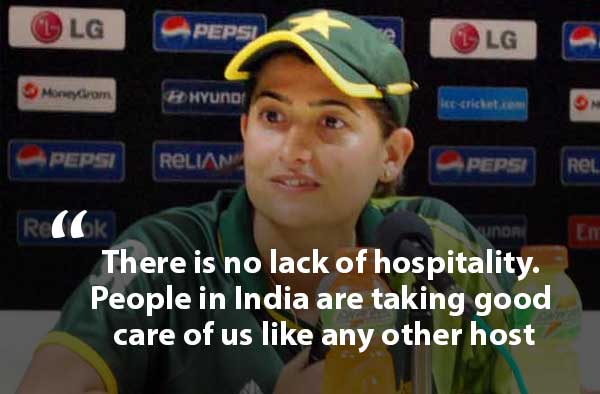 Sana mir is a role model for many girls in subcontinent and around the world. She was inspired by legendary bowler Waqar Younis. Sana always wanted to play for Pakistan and her dream came true when she was selected by national women cricket team of Pakistan. Four years after her debut, she was named as Pakistan’s women Cricket team captain. She has led the team quite well and has changed the perceptions of people towards women cricket in Pakistan. In an interview to a newspaper in 2016, she said, “the success of the women’s cricket team has encouraged other teams like badminton, football and squash. Sana enjoys huge support in the length and breadth of Pakistan and why not?She consider herself as citizen of every city of her country. She was born in Abbottabad, spent her childhood in Rawalpindi, then moved to Gujranwala, also lived in Taxila and Karachi and currently living in Lahore. When we talk about Sana’s statistics, it proves why she has been so successful in women’s cricket. She has played 95 ODI’s and scored 1217 runs with the batting average of 16.67. Her bowling average is quite impressive as she took 104 wickets in ODI’s with the bowling average of 27.61. She has been ranked as 6th in ICC women’s ODI bowlers ranking. T20I cricket is a game of nerve and she has used her talent in T20I matches too. Right arm off-spinner Sana Mir has played 75 T20I matches for Pakistan and took 66 wickets with bowling average of 20.37. She has led Pakistan to two gold medals in Asian games in 2010 and 2011. In 2013, Sana became the first ever Pakistani women cricketer to receive PCB women cricketer of the year award. Indian Cricketer MS. Dhoni is the biggest inspiration for Sana Mir. But she herself is an inspiration for many girls around the world, especially in Pakistan. She wants to see more Pakistani women in sports as she clearly stated before the Asian games in 2010 that “winning the gold here will be a great boost for women sports and help in rapid development of women Cricketers in Pakistan.”