If you ask 100 people in India “Do you watch Cricket” 80 might reply “Yes”, & about 15 might reply “I generally follow the matches when a match is on”

If you ask 100 people in India “Do you know Mithali Raj” 30 might reply “Yes”, another 35 might counter question “Isn’t she the captain of Indian women’s cricket team” or “Isn’t she a Indian female cricketer” which basically means about 65 people know Mithali Raj(not including her parents, her team mates (& their parents) and her immediate friends).

If you ask the 80+15, who watch/follow cricket “when did you last see Virat Kohli play Cricket” (fielding/batting), on field or on TV (Interviews & commercial Ads are discounted)? 50 might reply “these many days back on this day, he was playing against this team” & for the next 5 min they will elaborate on how he played that day. About 35 people might say “A few days back”, & about 5 people might just start their TV sets, switch to any of the Star Sports network channels & say “wait for some time, some or the other highlights might be shown, where you might see Virat Kohli”

If you generalise the Virat Kohli factor to just Cricket or Men’s Cricket the numbers will further grow & the 5 people who started the TV sets, will reply “Out of the 4 Star Sports channels (HD channels discounted) at least 2 of them will be showing/talking something about Cricket”

If you generalise the Mithali Raj factor to Women’s Cricket & ask them to name any 5 female cricketers from any country, the response might be painful.

That brings me to the topic, “A Supportive Cricket Board Leads to a Strong Team”

If you visit the BCCI web site; At the bottom in the “About” section you will read:

There is 1 thing that is missing & quite obviously: It is missing because, India for ages has been a victim of sexual discrepancy ((it’s a Man’s world)), & BCCI sadly doing their best to press down Women’s Cricket.

On the same BCCI website, on the left of “About”, there is “Quick Links”, & under it you will notice “Players”. When you click on “Players”, you will see a list of 42 male players Only; No Female players mentioned here. Try search on the site for Mithali Raj & you will get 114 results. These are all News & Videos, but no Images, & the funny part is, there is no Player result!

Even after the girls won the Asia Cup beating their arch rivals (be it any sport or gender, they are always arch rivals) Pakistan in the finals. Which basically meant the girls are 6th time Champions, & are yet to be beaten in the said tournament as they have won all their matched till date in the said tournament. There was no special mention of their special feat on the site.

The site basically has 4 bifurcations:

Fixtures (upcoming matches) & Results (concluded matches) and they are each further divided into International & Domestic.

An India vs Australia/England/New Zealand match (or any country for that matter) if the men play, the same will be termed as International Fixture or Result. Where-as the recently concluded India Women vs West Indies & prior to that, vs Sri Lanka are termed under Domestic matches. The Women’s World Cup as-well-as the Asia Cup 2016 are not featured at all under any category!

Tel me is this is not Sexual discrimination.

If you visit the website of some other Cricket boards:

Cricket Australia: They have the best site & they really care for the sport.

The Site has a Masthead which reads “Play Cricket”. The link takes you to a grass root level initiative for GIRLS CRICKET. 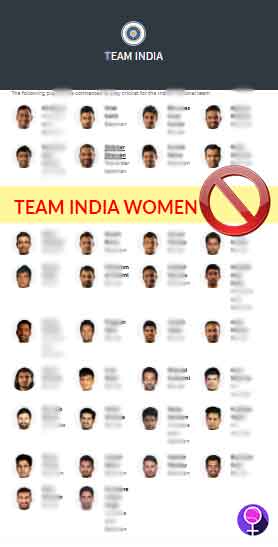 Back on the main page, Under “Fixtures” you get a choice to select Male or Female Fixtures.

Of course there is Women’s Big Bash League, & they list out the complete list of teams of WBBL & Aussi Women’s team along with the BBL, A Team & the National team. You click on let’s say “Australia Women” you get to see the teams recent concluded matched, their up-coming matches, news, Videos & A LIST OF 17 WOMEN PLAYERS OF THE NATIONAL TEAM.

But the best part is the “Players” tab. This lists out alphabetically an exhaustive list of all the international players from various countries. They give more details of a, let’s say “Anuja Patil” then our BCCI website given.

The Home page again shows, the 3 captains of the U-19, Men’s & WOMEN’S teams, holding their respective World Cups. On the Home page itself, there is a “Players Bio” window which lists a complete list of Windies International Cricketers Male & Female, with some basic details of them.

Then there is a “News” tab, under which there are various teams news, including Windies Women’s Team & Women’s League.

The Masthead of the site has Sana Mir & Irma Javed along with the male Cricketers.

Further; under “Team Profile” there are 4 options, National, Pakistan A, U-19 & WOMEN. Click on Women, you receive a complete list of 15 WOMEN Players, click on any player & you will get some details of the said player. You will further get an option of “Match Details” you get further details of what all matched that player has played in all forms. Click on any format & you will see the complete list of matched that player has played in that format.

Furthermore, there is a pull down menu of “Calendar”. Under that, there are 3 options, International, Domestic & WOMEN. Click on Women & you will get a list of International & Domestic matches.

Now let’s look at some even smaller side;

The Home page is purely news about all around the cricket world, but if you scroll down, there are 2 different columns, bifurcated into Nepal Men & Nepal Women. Right next to the “News” tab, there is “Live Centre”. This gives you the list of domestic & International tournaments Nepal has played since 2011, even for WOMEN teams. Click on the tournament & there is a list of matched that took place in that tournament.

If you hover over the “News” tab, you get options of various segments, including Nepal Women & BLIND CRICKET.

Further, when you click on the “Players” tab, you get a list of players segregated alphabetically. You also get an option of viewing only male cricketers or U-19 cricketers or WOMEN CRICKETERS. Click on the player & you get basic details of that player.

There is a prominent mention of the Women’s team & Women players in various places, eg. In the “About” tab there is “Cricket PNG Captains” under which they list out a list of Women’s team captains along with the Male & U-19 captains. Even under the “National Teams” tab we see “Pacific MMI Lewas” (that is what they call their women’s team). There is no list of players though but they give a brief description of the structure. They also run a Scholarship program for Women Cricketers.

There are more such Cricket Board websites, but over all unlike the BCCI website all the sites have good coverage to their Women cricketers. BCCI being the Richest Cricket board cuts itself a very sorry figure on the Women’s Cricket front.

Women’s Cricket Association of India was formed in 1973. However Indian women’s team played their first Test match in 1976, against the West Indies & the 1st ODI in 1978 against England. As part of ICC’s initiative to develop women’s cricket, in 2005 the ICC passed a directive to all its members to merge their respective women’s cricket boards. Reluctantly, in 2006 (appx Nov/Dec) BCCI accepted the merger with Women’s Cricket Association of India.

Now let’s look at the Sponsor of the team “STAR INDIA”.

Star India was awarded the Team Sponsorship from Jan 2014. It is a big question that stands in front of you that “Does Star India know that India Women’s Team is also a part of the Sponsorship package & the sponsorship is only worth if the team is seen playing”. Now we don’t exactly know what’s the deal that they have, but what I understand is that, Star Sports falls under the Star Network bouquet.

On 1 hand (Jan 2016) Star Plus launches a program (Tamanna) about a girls dream to play Cricket for the Nation. The sponsors even go to the extent of making the male cricketers play an international match with their mother’s name on their backs instead of their own name. Both the initiatives were heavily promoted, while “Tamanna” was seen on Promotions across various TV Channels, Print Ads & Huge Hoardings, the later was promoted on various TV channels using MS Dhoni, Virat Kohli & Ajinkya Rahane. It was without a doubt a very good initiative, but was not backed-up by the sports channel.

There is barely any coverage given to Women’s Cricket. And when-ever there is any coverage there is no marketing or promotion at all. The Asia Cup Final which was telecast on Star Sports, surprisingly was also promoted at-least on the same channel about 40 hrs before the telecast of the match (the Asia Cup U-19 got 3 days of Promos, while India vs England Men’s ODI got about 25 days of Promos); is there no intelligence implied in the programming at all, India women have not lost a match till date in the history of the tournament, did they not figure out that India will at-least reach the Finals. But why blame the channel alone, the Board too decided to played politics at the players stake, when they requested the ICC that India Women Vs Pakistan Women match should be called off.

Earlier in Jan 2016, India Women vs Australia Women match was telecast (again without any promotion at all) But the channel reached the new low when they din even care to show the Captain Interviews & Player of the Match!

As mentioned earlier, out of the 4 Star Sports channels, switch on any 1, at any given time. You will find some or the other highlights of some Cricket match, just that never will you find any Women’s Cricket match. They also have a program called “This Week’s Special” where they showcase events that took place in the past in that respective week. Events like birthdays for some renowned player or some memorable bowling spell or Batting inning by some player. Again there will be no event featured related to Women’s cricket or female Cicketer, cause Women cricketers were never born, neither did any women bowler take 5 wickets haul nor did any women batter score a century, not even a half century!

It seems that the only way the girls can get coverage is if they all retire & start doing commentary like Anjum Chopra & Isha Guha wearing trendy evening gown or they start playing professional cricket wearing Mini Skirts & sleeveless tops looking like Mayanti Langar (No disrespect to the extremely sexy Mrs. Binny, the lady does bring to the table a lot more than just her curves)

Star Sport Initiated a big step in making Kabaddi Big, & in just the 3rd edition was women’s Kabaddi introduced to Pro Kabaddi League. Couldn’t Women’s Cricket grow in the same fashion. The only logical explanation one could think is that BCCI’s attitude towards Women’s Cricket.

Big Bash League was introduced in 2011. In 2015 Women’s Big Bash League was announced. Indian Premier League was started in 2008, & earlier in 2016, when BCCI was asked about Women’s IPL, the representative in a very proud manner responded that the same shall be surely done in the coming 5 years! Seriously? Next 5 years? And you feel proud to say such a thing!

It is True, “With Great Power comes Great Responsibility” BCCI as-well-as Star Network (Star Sports) have great Power, its time they show their responsibility towards the Sport “Cricket” & not look at it as pure “Business”