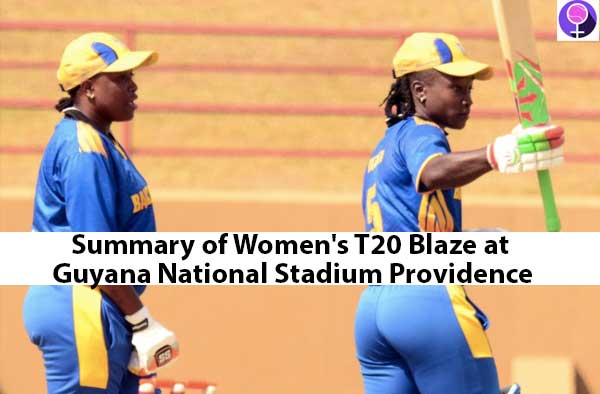 The Women’s T20 Blaze got underway last Thursday with three sets of matches which meant all teams were in action. The defending champions — Jamaica, faced the Windward Islands, Trinidad and Tobago battled hosts Guyana, while Barbados — who just claimed their second consecutive Super 50 title — went up against the Leeward Islands.

Jamaica got off to a winning start, downing the Windward Islands by 62 runs. After posting 185 for 2 after their allotted overs, led by half centuries from Jodian Morgan and Natasha McLean, the Windwards could only muster 123 for 8 from their 20 overs.  Chinelle Henry and Vanessa Watts took four wickets apiece.  Jodian Morgan walked away with the Player of the Match award.

Trinidad and Tobago made light work of Guyana’s 157 in the end, getting to their target with eight deliveries to spare.  Shemaine Campbell was again among the runs for the hosts this season as she top-scored with an unbeaten 77 to lead the team to 157 for 4. Trinidad and Tobago was led by half centuries from Britney Cooper and Stacy-Ann King 62 and 59, respectively.  King was awarded Player of the Match for her efforts.

Barbados started the tournament with a bang, getting up to 206 for 6 after batting first against the Leeward Islands. It was a total which would hand them a big 99-run victory. Deandra Dottin led the onslaught with a top-score of 66, while captain Hayley Matthews chipped in with 45. The Leewards could only manage 107 for 5 from their 20 overs. Mathews returned with the ball to claim two wickets, but this was not enough to beat Dottin to the Player of the Match award.

The biggest winners from round one faced off in round two as Barbados met Jamaica. The game did not live up to the hype, however, as Jamaica failed to take Barbados out of first gear: folding for 95 within 18 overs as Shanika Bruce and Mathews tore through the batting line-up with four wickets each. Barbados got to their target losing a solitary wicket in 12 overs.

Guyana was then able to get a first win of the competition, getting by the Leewards by 23 runs. Scores in the match; the Leeward Islands 123 all out and Guyana 146 for 7. While in the other game of the second round; Trinidad and Tobago — in chasing a revised target of 58 in 8 overs (due to rain) — got home with a ball to spare, thanks to Cooper with an unbeaten 20. The Women’s T20 Blaze continues today with  Jamaica vs. Guyana, Barbados vs. Windward Island and the Leewards Island vs. Trinidad and Tobago.