The Women’s Under – 23 T20 league and knockout gives the opportunity to the young sensations of the country to take a step closer to their dream. It is a tournament that portrays the talents of aspirers from all over the country. With 36 teams playing, each one representing a state or a city, the tournament makes sure it touches all corners of India. 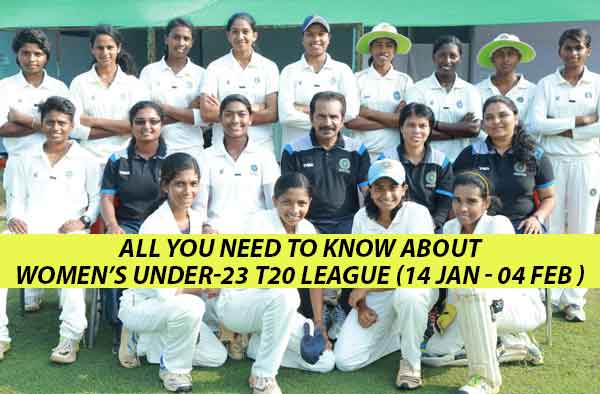 Back in 2018, it was Kerala who had the last laugh defeating both Mumbai and Maharashtra with the tournament coming to a close in early April!

Representing the Andhra Cricket Association, C H Jhansi Lakshmi scored 244 runs in the nine matches that she played becoming the highest run scorer of the tournament spanning 19 days! Followed by her, Nikita Singh playing for Madhya Pradesh bagged 235 runs to her name !

Tamanna Nigam(MPCA), Shafali Verma (HCA), M R Magre (MHCA) and S Meghana were a few others who scored more than 200 runs for their respective teams in the tournament. B S Fulmali raised the bar by being the highest individual scorer scoring 70 runs off 44 balls against the Railways.

Impressing in the bowling department was Charu Joshi picking up 17 wickets in nine games followed by N Maji who had 15 to her name. Neelam Bisht set a new standard for records by picking up 5 wickets against Jammu and Kashmir giving away only 3 runs in the 3 overs that she bowled.

Domestic cricket is one sphere of the sport which many don’t give importance to. However, it is that sphere which gets hold of the stars and let them know they’re there to shine. It is that arena where it’s made sure that talents are encouraged and opportunities are seized. Its only domestic cricket that gives shape to the national side which people have all eyes on.

This tournament is one which makes sure every corner of the country is touched upon. Every zone is encouraged to pursue their interests and aims in the 22-yard circle. There are those states taking part where we never even knew have the culture of cricket. Starting from the 14th of January, it will be exciting to follow the new talents this year, fascinating to see how the youth takes the ground bang on. With emerging talents and initiatives like these, there’ll be many stars to follow in future and many who would learn from the experience and come back stronger.

With the tournament round the corner, Kerala being the champions are likely to start as favourites. It will be interesting to see if they can manage to retain their position or another team can surpass them. One would also look forward to following teams like Mumbai and Maharashtra who managed to reach the last leg of the tournament and how well they can come back this time!
A league comprising young talents aiming for a place in their national side, each one would be looked upon closely! Chances of having favourites like we do at the senior level is unlikely to happen! A tournament like this makes sure that every individual feels equal to another in matters such as selection and play! And it would be heartwarming to see the emerging stars with some undiscovered talents and strategies from tomorrow!
At the end of the day what matters most is – PERSEVERANCE, PASSION AND COMMITMENT – and this we expect to be displayed !!
Avni Daga