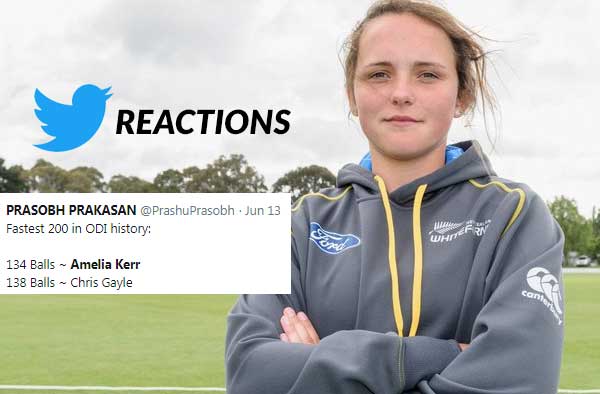 Here’s how Twitter reacted to Amelia Kerr’s dominance in the 3rd and Final ODI against Ireland Women.

Her Dad played for Wellington. Her Grandad (Mum’s side) played for NZ.

Amelia is 17. She is phenomenal.

Century and 5-wicket haul in an ODI match: (Men/Women)

A couple of years ago, Amelia Kerr was a 14-year-old in a YouTube clip shredding leg-breaks to win a domestic NZ T20. At 17 she’s just broken the record for the highest WODI score, last ball of the innings, with a six. 232 not out.

Fantastic innings 232* by a 17 yr old NZ cricketer Amelia Kerr vs Ireland. An ODI double hundred at a young age of 17 yrs. Quite an achievement. Congrats #AmeliaKerr. Enjoy this moment of success. #NZvsIRE pic.twitter.com/HjUEhpCRly