Let us look at one of the six teams, team Warriors and its players. 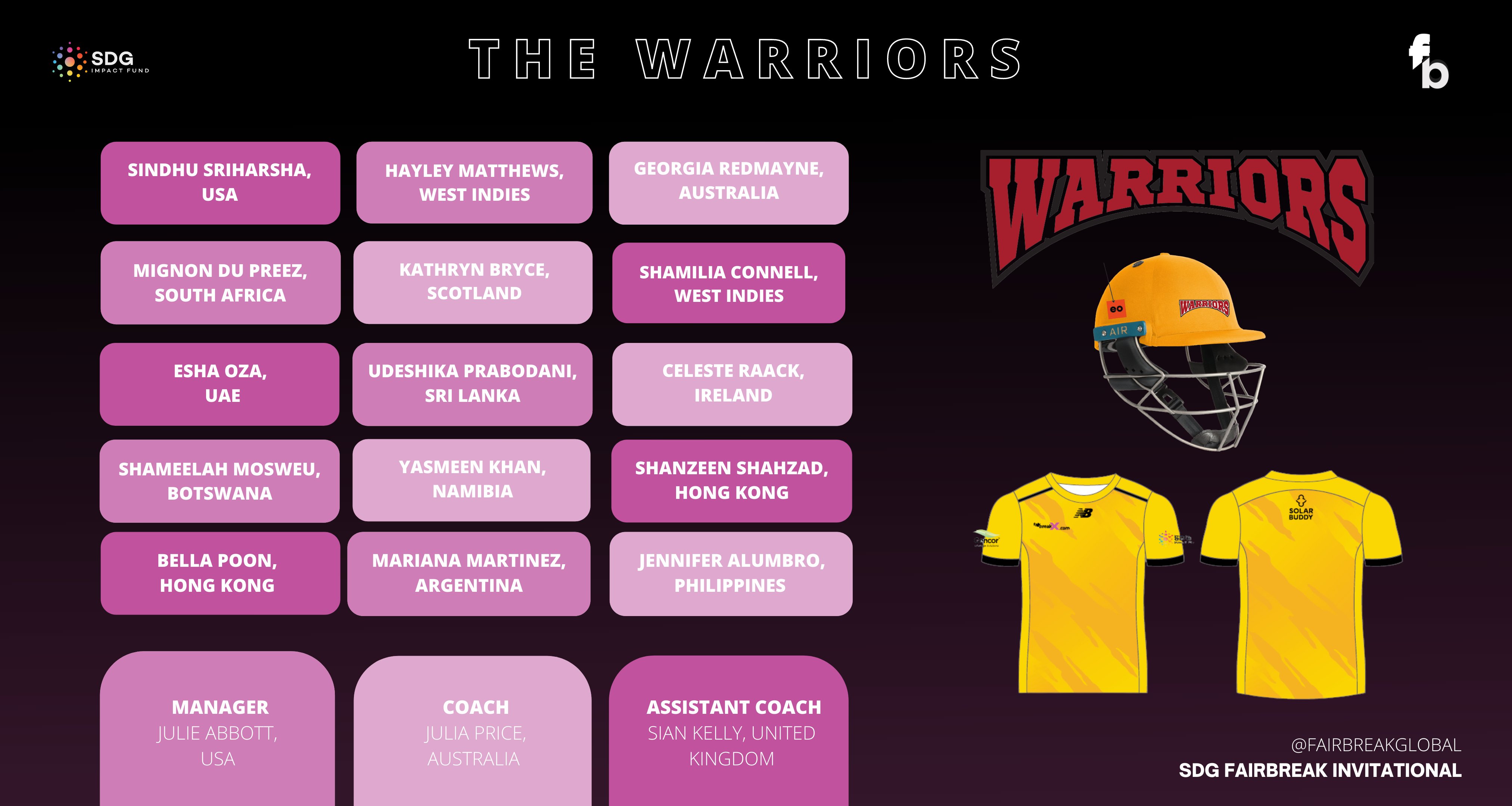 Some of the players to watch out for from this team will be Hayley Matthews, a star all-rounder from West Indies. The right-handed opening batter and right arm off spinner is a valuable asset. Apart from Matthews, there is Mignon du Preez, a prolific run-getter from South Africa and an experienced campaigner. Australia’s Georgia Redmayne will add to the batting power. The pace department will be bolstered by West Indies’ Shamilia Connell and Sri Lanka’s Udeshika Prabodhani.

The former India A and India U-21 player, who now represents the USA, will captain one of the teams in the FairBreak Global Tournament 2022. Captaincy will not be new to her since she leads the USA team. The Bangalore-born cricketer is an opening bat and wicket-keeper. She has played 14 T20Is for the USA, scored 159 runs and accounted for nine dismissals behind the stumps.

This star West Indian all-rounder has featured in 61 T20Is since 2014. This attacking right handed opening batter has muscled over a 1000 T20I runs, including a century and four half-centuries. With the ball, the right arm off spinner has 58 wickets to her name, including two four wicket hauls. Apart from her batting and bowling, she is an electric fielder.

Australia’s wicket-keeper bat was a part of the Australian squad for the India series that was played in September-October last year. However she is yet to make her international debut. In the recently concluded WBBL (Women’s Big Bash League), she was the fifth-highest run-getter with 437 runs from 14 matches, including five half-centuries. She is an attacking left-handed opening bat and wicket-keeper.

This South African batter has played more than 100 T20Is for the Proteas. She has mustered 1750 runs, including seven half-centuries at a strike rate of more than 100. She is a dependable middle-order batter and has been a former captain of South Africa having led the side in 50 T20Is.

The captain of Scotland is a right handed batter and a right arm seamer, who has featured in 26 T20Is. She has registered 647 runs and accounted for 25 wickets. She has been playing international cricket since 2018.

The West Indian speedster is an experienced international player having been around in the international circuit since 2014. She has featured in 96 international matches, including 45 ODIs and 51 T20Is and has claimed 63 wickets. She is quick and has the reputation of bowling disciplined lines and lengths. She is a good new ball bowler.

She is a talented all-rounder from the UAE. She has been playing international cricket since 2018. She has appeared in 21 T20Is, scored 463 runs and accounted for 15 wickets.

She is a right handed batter and a right arm medium fast bowler, who has played nine T20Is for Argentina. She has mustered 41 runs and picked up seven wickets.

She is a right arm leg spinner from Ireland who made her international debut in 2018. Since then she has played 19 T20Is and picked up 13 wickets, including the best of 3-15. This wily leg spinner has an economy rate of under six.

The left arm speedster from Sri Lanka is one of the best in the business. She is an experienced campaigner with 75 T20Is under her belt. The pace ace has scalped 1 wickets, including the best of 3-16. She is a good new ball bowler and can swing the ball too.

She is a right handed batter from Namibia who has featured in 37 T20Is. She has scored 566 runs, including two half-centuries. She has four wickets in as many innings with the ball, bowling right arm medium pace.

She is a left-handed batter and a right-arm-off spinner, who has been a part of 18 T20Is for Botswana. She has registered 206 runs, including one half century and has 14 wickets to her name.

She is a right-handed batter from Hong Kong. Having made her international debut in 2019, she has featured in 10 T20Is. She has a decent strike rate of more than 80 and the best score of 18.

This right-handed batter from Hong Kong has been a part of the international setting since 2019. She has played 13 T20Is and mustered 71 runs, including the best of 14.

She is a left-handed batter and a left-arm seamer from the Philippines. She has played four T20Is since her international debut in 2019. She has scored 14 runs and is yet to take her maiden international wicket.

She is a former Australian cricketer, who played 10 Tests and 84 ODIs between 1996 and 2005. She was a right-handed batter and a wicket-keeper. After hanging up her boots from playing international cricket, she took to coaching. In 2019, she was appointed as the head coach of the USA women’s cricket team.

She is a right-handed batter and wicket-keeper, who played county cricket in England for Warwickshire.  She played her last domestic game in 2017. Later she moved to coaching and is now associated with Argentina as the head coach.