In a move to get much needed practice before the upcoming T20 Women’s World Cup to be held in the Carribean in November, the Pakistan Women’s Cricket team will be touring Bangladesh followed by a home series against Australia in the month of October. 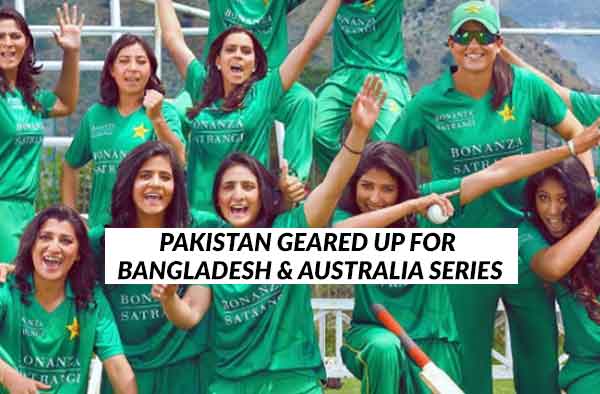 The Pakistani women’s team will feature in a limited overs competition against both the sides. The series against Bangladesh will be held from 1st of October to 8th October and will comprise of 4 T20 internationals and one ODI. Succeeding this tour, Pakistan will host Australia from 18th October to 29th October in 3 ODIs and 3 T20 internationals. The series will be held in Kuala Lumpur, Malaysia. Pakistan had to look at alternate venues apart from UAE, Sharjah and Abu Dhabi since the dreaded militant attack on the Sri Lankan cricket team during their 2009 tour.

The new venue will post new challenges for both Pakistan and Australian women’s team as the conditions will be alien for them. However, it will act as a good preparation ground for both the teams. The Australian team will be touring just after they complete their home series against the Kiwis.

The Bangladeshi Women’s team will be extremely confident as they are coming off from a successful series against Ireland where they won 2-1. Bangladesh also emerged the winners of the T20 qualifiers which comprised of 8 teams battling out to qualify for the World T20. Also, they are the current Women’s T20 Asia Cup champions where they defeated the Indians in the finals. They also got the better of the Pakistani team where they won by 7 wickets in the group stage match.

The Pakistani women’s team prior to Asia Cup played against the Lankans where they enjoyed a successful outing. They won both the T20 cup 2-1 and whitewashed the Sri Lankans in the ODIs.

Australia on the other hand who is the number 1 ranked team in ODIs had last played a ODI series against India in their home where they whitewashed the home team. They also featured in a tri series which included England as the third side and won the cup too.

The upcoming series will have all the sides experiment with their team combinations and few players will like to cement their place in the side as well before the main event. Some of the key players to look for in the upcoming series for each team are as follows –

Rumana Ahmed – this Bangladeshi all-rounder has been one of the major reasons of success for Bangladesh in the recent past. She picked up 10 wickets at an average of 4.20 in the Qualifiers for the T20 World Cup.

Fahima Khatun – Another all-rounder who has made useful contributions with both the bat and ball for the team. She picked up 9 wickets at an average of only 5.89 and also has been amongst the runs.

Nahida Akter – The 18 year old youngster has a dream start to her career. She has picked up 27 wickets at an average of nearly 16 in the T20I career thus far. She will surely be a lethal weapon on the slow Bangladeshi wickets.

Other notable players to look out in the Bangladeshi team will be the wicketkeeper batswoman Shamima Sultana, Fargana Hoque and quick bowlers Panna Ghosh and Jahanara Alam. Overall, the Pakistanis will have their tasks cut out facing the Bangladeshis at home and the home team will start as favourites for the contest based on their recent form.

Sana Mir – The Pakistani captain has always led from front. She has always been amongst the wickets and has made useful contributions lower down the order. Currently ranked 5th at ICC Player rankings for both bowlers and all-rounders, she was the highest wicket taker in the Lankan ODI series where she picked up 10 wickets in 3 matches.

Bismah Maroof – One of the top scorers in the Asia T20 cup and the highest scorer for Pakistan, she scored 143 runs in the tournament. Also, a useful leg spinner, she has a good economy rate of 5.29 in T20Is.

Nida Dar – She was the highest wicket taker of the tournament in the Women’s Asia Cup T20. She picked up 11 scalps at an average of 7.27 per wicket. A more than useful lower order batswoman, she will surely have a huge impact on the outcome of the series.

Apart from these, Javeria Khan will have the responsibility of scoring runs for Pakistan as she has done in the past. Other bowlers like Diana Baig and Nashra Sandhu will have to be at their best to compete well against Bangladesh and Aussies.

Meg Lanning – the “Megastar”, the Aussie skipper averages 53 with the bat in ODIs and has scored more than 2000 runs in T20Is at a strike rate of nearly 120. Currently ranked 3rd in WODI batting rankings, she scored 175 runs in the triseries in India and was not dismissed in her 4 innings.

Megan Schutt – currently ranked 2nd in the WODI bowler rankings, her impressive career figures speaks a lot about her abilities. She has picked up 66 wickets in ODIs and 38 wickets in T20Is at an economy rate of 6.18 per over. She was the highest wicket taker in the T20 tri series in India.

Ellyse Perry – She is arguably the top allrounder and batsman as per the current WODI rankings, has scored more than 2500 runs in the ODIs and picked up 130 wickets. Even her T20 figures are as impressive and she is the major reason that the Australian team has been at the top of the World rankings in the recent past.

Other notable names are top ranked ODI bowler Jess Jonassen, aggressive batswoman Nicole Bolton and wicket keeper batsman Beth Mooney. The Australians should ideally be able to get over the line against the Pakistanis but the foreign conditions which will suit Pakistan more than the Aussies shall make it an interesting contest.