After gaining a well deserved win in the opener, now India’s Women XI are scheduled to play West Indies Women in their 2nd fixture on 29th June 2017 i.e. today.
The match will be played at The Cooper Associates County Ground in Taunton. 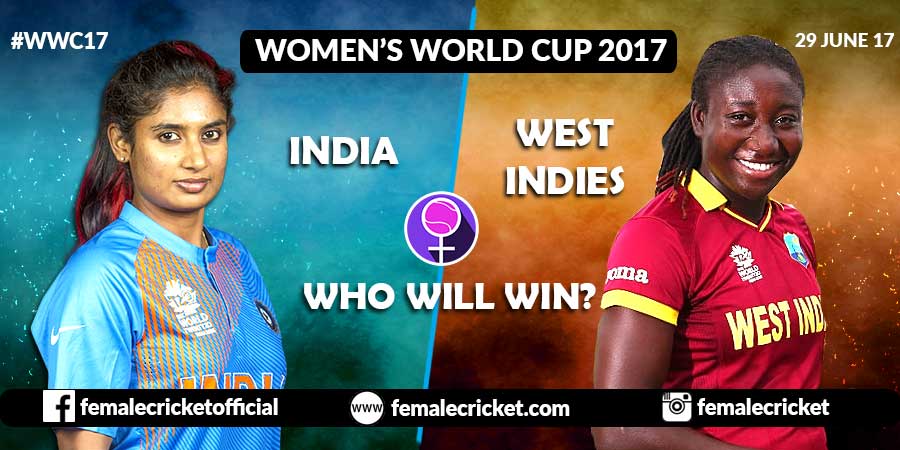 Evidently, India is riding high on its confidence and WI is suffering from a low morale phase right now.

Going by the results, it may be inferred that on the one hand Indian team will be aiming to continue its winning spree and on the other hand West Indies would be looking to end its losing streak.

Indian captain Mithali Raj is leading from front and her current streak of some stunning knocks shows the hunger for runs she has. Making new records seems to be one of her most favourite hobbies.

The return of form of team’s opener Smriti Mandhana is also a very good news for Indian contingent.
Deepti Sharma showed in the last match that how well she is developing as a spinner. Needless to say Jhulan Goswami has always been a precious asset to Indian Team.

Despite being the finalist in the 2013 edition of Women’s World Cup, West Indies is struggling to re-establish their position these days. WI team is led by Stafanie Taylor and has some of the most experienced players like Hayley Matthews and Deandra Dottin who can effectively deliver under pressure.
Deandra Dottin, an all rounder, is well known for her death overs bowling and destructive batting. She has the ability to rip away the bowling attack of any team on her day.

As of now, India Women enter this game as favourites but as we all know Cricket is a Game of Uncertainties, so, let’s wait and watch.
With the hope that India Women continue to showcase their brilliance and wishing them good luck, we take a leave for now only to be back with our post match analysis. Till then, keep following Female Cricket for all the latest updates.