Captainship is a huge responsibility. A captain carries the load of the entire team and guides them to the path of success in the game. They have to be a leader by example for the other team mates as well as encourage them towards the betterment of the team. Women were never lesser than men and this would’ve still made sense 50 years back because of them. So below are the few captains from the time back who did their best in their job and have earned glorious amount of respect for the game as well as themselves. It is apparently said that her fate was tied to the game right from an early age as she started playing cricket in her railway colony where she lived. She then went on to play basketball and table tennis at the junior national level, before turning to cricket. Where she was first noticed was at a cricket camp hosted by former cricketer Lala Amarnath. Diana then went on to play for the Railways and then the Indian national cricket team where she was a successful slow left-arm orthodox bowler. She played her first series in 1975. She earned the post of the captain in three years. In 1993, the Government of India honored her with the greatest achievement of sports named as the ‘Arjuna Award.’ She also obtained the Padma Shri award in 2002. With 120 wickets, she remains the highest wicket taker of the game. She was appointed in BCCI administration panel by the Supreme Court of India on 30 January 2017. Former secretary of the Women’s Cricket Association of India, she was a leg spinner in the Indian cricket team. She began her career by playing in domestic matches for Maharashtra and later joined international matches with her debut in the Indian team against West Indies in 1976 which was also the first time India faced West Indies. Shubhangi Kulkarni played in 27 ODIs over 5 international tours. She was the captain for three test matches as well as one of the ODIs that was held against England. Currently, she part of ICC Women’s Cricket Committee representing Asian Cricket Council. A perfect all-rounder known by the name Purnima Rau was an expert at both batting and bowling.She played most of her ODI innings in the middle order and bowled right arm off spin. She made her test debut in the year of 1995 against New Zealand and her ODI debut in 1993 against West Indies. Born ion 30th of January in the year 1967, the Hyderabad girl has played 5 matches in the test series and 33 Matches of the ODI format for the Indian team. She was the captain for one domestic match and also for 3 test and 8 ODI matches. If you don’t know where she is now, she is he current coach of the Indian Women’s cricket team encouraging and guiding the players of today. The Bangalore girl played between the years of 1990 to 1998.She played 5 Women’s Test cricket matches between 1990 and 1996 and 22 ODI matches cricket for India between 1993 and 1998. She captained the Indian team in 1 test match and 7 ODI matches. An all-rounder, she played most of her ODI innings in the middle order and bowled right arm off spin. 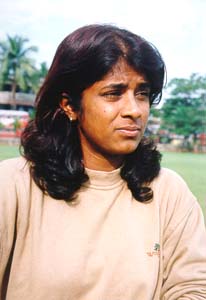 She started with playing for Indian Railways in the domestic matches. Born in Punjab, she was a middle order batswoman. She has been an active player between the years of 1993 and 2000.She played Women’s Test cricket for 5 matches between 1995 and 1999 and ODI cricket for India for 31 matches between 1993 and 2000. She captained the Indian team in 1 Test match and 4 ODI matches.She played in England women’s domestic league, representing Middlesex Women in 2001 and the Braves in 2002. She was a part of the squad for the World Cup in the years 1993 and 2000.

Just like the above, Anju Jain also started her career with domestic matches but played for Air India instead. She is the only player to have featured in four world cups consecutively so far.She played Women’s Test cricket  for 8 matches between 1995 and 2003 and ODI cricket for 65 matches between 1993 and 2005 for India. Her role in the team was opening the innings and fulfilling the post of the team wicket-keeper.She captained the Indian team in 8 ODI matches, all during the 2000 Cricinfo Women’s Cricket World Cup  where India advanced to the semi-finals. Anju received the Arjuna Award in 2005 for her sporting achievements from then President of India Dr. APJ Abdul Kalam, hence been declared the best sportsperson of the year in Cricket.She has been a coach associated with development of youth and women’s cricketers of Andhra Pradesh. She has also been a coach to Odisha and Tripura as well as for the Indian side. Currently she is the coach of Assam. Related Article: Do you know who is the most versatile Female Cricketer?

Anjum Chopra made her debut in one-day internationals at the early age of 17, on 12 February 1995 against New Zealand at Christchurch, New Zealand, and made her debut in Test cricket a few months later against England at Eden Gardens, Kolkata, on 17 November 1995. In only her second series for India the same year, she was awarded player of the series in the one day internationals against the visiting England cricket team, scoring runs at an average of 67.5.She is a left-handed batsman who bowls right-arm medium-fast. She has played in 12 Tests and 116 ODIs. They are working towards the movement that is encouraging other female cricketers to help contribute to the success of this growing worldwide community and hence have altogether managed to dedicate a history that belongs to it.

One thought on “Former captains of Indian women cricket team”