A cricketer by an accident, who had never ever thought of playing for her country, but is donning the national colors today and carrying responsibilities of millions over her shoulder. As she repeatedly mentions in the interview, it is clearly evident that cricket was an accident which changed her life for better. It all started at a Mini Cricket Festival which later turned her into the most celebrated female cricketer of South Africa. So, tie the seat-belts and brace yourselves for a roller coaster ride, as former South African captain and a national cricket player Mignon Du Preez walks us through her cricket journey. 1. What drove you to cricket? Walk us through your initial cricket days?
I actually started playing cricket by accident. My older brother played Mini Cricket and my dad was their coach. At one of the Mini Cricket Festivals, their team was a player short and my dad asked if I wanted to play (I was only around 4½ years old). However, at the end of the day, I was the best batter for the day and won my very first accolade in my life – that is where my love started for the game. (The acknowledgement I received that day might have been something quite small for bystanders – but it changed my life.)

In Primary School I played mainly with the boys and started playing for Doringkloof Primary’s 1st cricket team at age 11. (I might have been the first girl ever to score a 100 runs in a match for a primary school (boys) first team). During my Gr7 year I got introduced to girls/women’s cricket and started playing for Gauteng North (Northens) Women’s Cricket team. I scored my first double hundred during in the same year (Gr7) in a provincial game for Gauteng North’s u/13 girls cricket team versus Gauteng’s u/13 girls cricket team (scored 258* not out in 96 balls (16×6’s & 28×4’s). I also represented SA in u/17 girls Indoor Cricket.

Fortunately Zwartkop High School had a girls’ cricket team and I continued playing more girls and club cricket. At age 17, I got invited to my first National Training Camp for the South African Women’s Cricket team and finally made my debut for South Africa in January 2007 against Pakistan (in Gr12). I’ve played for South Africa ever since. I missed out only on a single tour since 2007 due to exams (during my Marketing degree exams at University of Pretoria).

2. Who were your cricket role model / inspiration whilst growing up?
Sachin Tendulkar – He always had a presence at the crease. He is definitely a cricket legend, yet he always stayed humble and never got too big for the game. (He
even gave up his captaincy to score more runs for his team.) 3. Back then, how did you cope up with your studies / education / other commitments along with cricket?
It was not always easy to juggle studies and playing for my country but I was really good with my time management.

4. We got to know that you scored your double-century in a provincial Under-13 match at the age of 12. Could you recall the special memories and give us few insights on the same.
I was actually not supposed to play that day, however the night before the game my dad got a phone call saying the team urgently needs a player and whether it will be possible for me to please help out. When I got up the next morning I was really excited to play. Gauteng North’s U/13 girl’s cricket team played against Gauteng’s U/13 girl’s cricket team. Gauteng North batted first and that is when the magic happened. I scored 258* of 96 balls (16 sixes and 28 fours). I think this was the day
that I realised that cricket is my God-given talent and that I might actually be able to play it professionally in the future.

5. When and how did you come to know about your selection in the national team? Could you recall the moment and describe it in words?
I did not make the initial squad to tour against Pakistan. However, a player got injured during the December holiday and I got my call-up early in January 2007. I remember I was walking outside in the garden when I got a phone call from the head coach that said I’ve been called up to represent my country. I even get goose bumps when I recall that moment. My dream had come true. To represent your country is really something special and very hard to put into words… 6. How special was your debut match at the age of 17 against mighty Pakistan on Jan 22, 2007?
As mentioned above to represent your country is really something special. I know I was extremely nervous to walk out in my green and gold for the first time, however having all my family and friends there on the day helped to calm my nerves and made my debut even more special.

7. What is the next realistic goal / target you would want to achieve individually as well as a team?
I want to be part of the first South African Women’s Cricket Team to bring an ICC Women’s World Cup Trophy home – this year it is possible…

8. How easy/difficult was it leading the team? How has it changed after Dane Van Niekerk took over the responsibility?
Being captain is definitely not an easy job. I lead the team 97 times. It comes with lots of responsibilities and ‘behind the scene work’ to ensure you lead the team in the right direction and get the best from all your players. Captaining my country was truly an amazing honour and something I will cherish for a lifetime.

Dane and I get along really well and the transition has been very smooth. Stepping down as captain has allowed me to focus a bit more on my own game as a batter. It worked for Sachin – hopefully it will work for me 

9. What is the general perception about women’s cricket in South Africa? How has it changed post qualifying for World Cup 2017?
The scary thing is that there are many people in South Africa that does not even know women play cricket on national level. Only social media and the media in general can change that perception that only males play cricket. Unfortunately we hardly ever get television coverage and during our quest to qualify for the ICC World Cup we had one or two matches streamed. We as women cricket players are only guaranteed airtime on television when we compete really well. We hardly get a mention in the news and this has been a motivator for me to do good and attract attention for women’s cricket.

10. A moment that you feel was the turning point for women’s cricket in South Africa?
In January 2013 when Momentum announced a six-year sponsorship.

11. What are the biggest challenges still prevalent in the South African women’s cricket circuit?

12. Throw some light on the current domestic structure in South Africa? Highlight some of the tours/tournaments that have helped churn out quality players?
We have two pools, an A pool and a B pool. Each pool consists of 6-8 teams. These teams play each other in a 50 over and 20 over game in a round-robin. At the end of the season, the A pool as well as the top two teams from the B pool, join each other at a cricket week in Bloemfontein. This week works on promotion and relegation fashion with the top 6 teams qualifying for the A pool for the next season and the bottom two teams to join the B pool again.

CSA invested in a National Academy for Women’s Cricketers. I think this has been a key factor that helped graft the quality of our players.

13. What was going through your mind in the last over of World Cup Qualifiers final against India last month?
Come-on girls, we can do this…

14. Consecutive wins at world cup qualifiers must have boosted the overall confidence. How excited are you and the team for ICC Women’s World Cup 2017?
After qualifying for the World Cup, something happened with the players. There is now an “undoubted self believe” that we can win the world cup in England. There is only one team in the world we have not beaten yet – so with the right appetite for winning – we can surely end up in the final and win it.

We are extremely excited and really motivated. This year we are definitely going with a purpose, to bring that trophy home to South Africa…

15. Your views on Female Cricket as a platform?
I LOVE it…
It is really awesome seeing the passion you guys have for the sport. Thank you for all the hard work to keep people updated about all the exciting things that are happening in the world of women’s cricket. We need more cricket enthusiasts willing to go the extra mile like you guys… Favourite place to visit / hangout spot?
Home with my husband A female cricketer (irrespective of her team) you want to bat/bowl along?
Mitali Raj 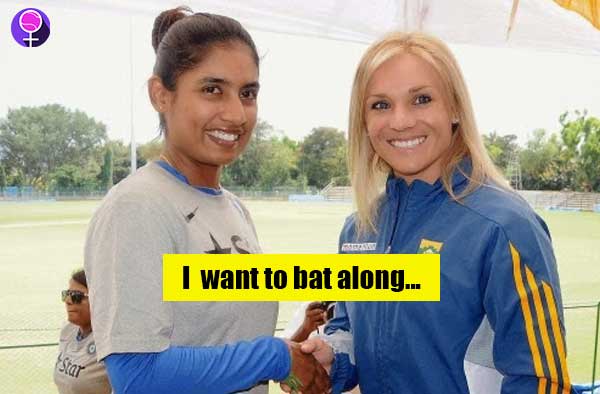