Cricket has always been the breathe of the masses in India. A mass of not hundreds or thousands but about over a billion hearts. The breathe that unifies the nation like nothing else. The country has always had produced commendable talents, encouraged budding youngsters with the warmth from the cricket board and the vibrant vibes from the fans. In the past few years, with the rise of limelight towards women’s cricket, there has not only been a rise of fans but also a desire amongst the fans to take up the sport. I reckon, the love and spark towards the sport is through the inspiring talents of the sport. One such talent from Team India is the women in blue, Harmanpreet Kaur.

Harmanpreet Kaur, an all rounder from Punjab, India. In the domestic level, hailing from Punjab, she has played for Punjab Women Cricket Team. In 2008, she has also been a part of Leicestershire Women’s Cricket Team. She made her debut for India at the age of 20. Kaur has captained the national side in ODIs during 2012-13. In T20I, after her 2012 Women’s T20 Asia Cup captaincy in the finals, Kaur captained in the recent past against West Indies and Asia Cup in which India emerged victoriously beating Pakistan in the finals to defend the title. Though having played 61 T20 matches, the most number of matches in a format, she has an edge with her ODI statistics over other formats with an average of 33.77.

Now 27, with an experience of seven years, a middle order batsman, an all-rounder, throughout the years have made her mark in the field, making the nation make the mark in the field. She has been a part of different editions of ICC Women’s World T20 after her T20I debut in the 2009 edition. Also, editions of Women’s T20 Asia Cup for the women in blue. Recently, around last year in November 2015, her 9 wickets against South Africa clinched India to victory by an innings and 34 runs. Kaur has proven an impactful right arm medium fast bowler too. With an impressive all-rounder, she is now a rigid part of Team India’s spine. She has also had interests by an overseas Twenty20 franchise.

Harmanpreet Kaur’s stint with Team India had her attention drawn by the Twenty20 Tournament, Women’s Big Bash League. With BCCI approving the participation of Indian women cricketers, the doors to widespread her field was possible. Currently, in the second edition of Women’s Big Bash League, she is signed by the defending champions Sydney Thunder. The first Indian women to play in an overseas league, she made an impact in her opening match of the season itself. With an unbeaten innings of 47 off 28 balls, Kaur has got admiration speculate from the cricket arena. The Australian legend, an ex-cricketer, Adam Gilchrist tweeted:

Also Read:  Where to get tickets for 2nd T20I between India vs Australia Women’s Match? 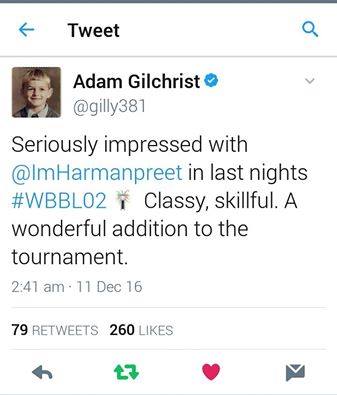 One of the greats admiring India’s girl, an impressive way for the women in blue to commence her participation in the league to shine in new vibrancy.

Kaur has also been known for her ferocious celebrations alongside her fierce role in the team. As a team player, a captain and on-field heroics, she is valorously making her mark in the field, the team’s mark in the arena. Shining in blue and carrying her spark across boundaries, reckon she has emerged as the lioness of Team India, Harmanpreet Kaur.