India’s undefeated journey in the group stage again failed to break suckle in the knock-outs and they faced the 2nd defeat within 15 months against the same opposition in the ICC event. The defeat also stirred up the controversy upon the management’s decision to not include Mithali Raj in Semi Final, who has been in delicate touch and has seen many summers and winters in the Indian colour. Despite of the fact that unfamiliar pitch and the slow nature of the wicket India left out their prominent batter and failed to pile up a score to defend and collapse in batting, resulted the 8 wicket defeat as England solved the spin–jinx and batted with the right approach. Experienced Sciver and Jones made an unbeaten partnership of 93 to sail through to the final. 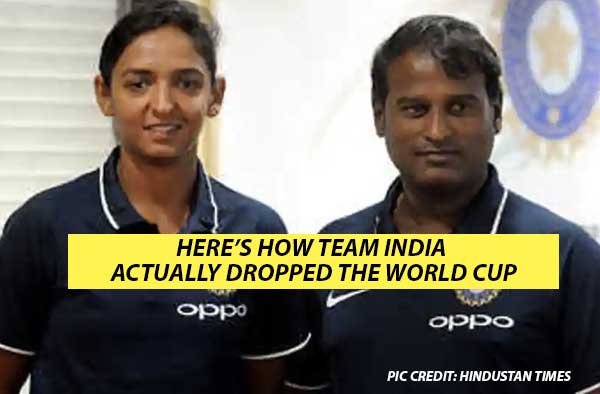 Despite the entire heart break, controversies, ifs and buts India portrayed a decent show as they qualified in the Semi after 8 years. undefeated in the group stage.  So apart from the Mithali Raj – Ramesh Powar Saga which came to the light after the world cup, let’s recollect some moments form the journey which though failed to bring the trophy back home, shown the glimpse of promises to improve in the changing contour of the format of the game.

1. Harry’s Wand sets World Cup on Fire :
It was the first standalone women’s T-20 world cup and Indian skipper Harmanpreet Kaur in the very first match set the world cup on fire. She came at the time when India were 40/3 and ace Kiwi bowler Lea Tahuhu with her fiery speed and swing delivered tough challenges to the batters. She took her time and 13 balls to score 5, but as she and young prodigy Jemimah Rodrigues started to gain confidence, both of them torn apart the New Zealand bowling attack. Harmanpreet forced Uber to donate 8000 US Dollar for the grass root development of women cricket on her way to 103. Many of her sixes crossed even the men’s boundary as well and it helped the team put up the highest total in the Women’s T-20 World Cup 194/5. She also became the first Indian female player and skipper to score an international T-20 hundred in World Cup. Her sixes which redefined the batting in the last world cup did the same in this world cup as well. Her fearless batting also sets the approach of the skipper towards T-20, as well as it sends the strong message to the team.

2. Smriti’s crafting on Mithali’s Wall:
Dropped down in the batting order in the first match to give the middle order needed depth against a strong opponent, Mithali was send to open the batting against Pakistan which had versatile spin attack. Though, the latter development of events and as several emails projected the different binary within the team during the world cup, in the match Mithali with her resilient batting showed the temperament and the class and proved a point that T-20 is always not about blind slogging. Her 56 of 47 crafted with 7 boundaries and her partnership of 73 in 55 with Mandhana set the platform which earned her the player of the match medal.  In the very next match against Ireland though she made another half century 51 of 56, her slow batting created irk in management and despite winning the player of the match she was accused of selfish batting and ‘lack of intent’ in her approach.

While Mithali Raj’s batting projected as the apostle of determination, Mandhana, the player of the tournament in KSL, became the lighthouse of resilience. Her initial failure of the tournament was overshadowed by her innings of 33 against Ireland and a dominant 83 of 55 against the mighty Aussies. With 9 fours and 3 sixes, Smriti’s innings set the tone of the match and gave India the chance where they can think of winning the match, and the changes were increased as Healy was ruled out of the match due to the concussion she suffered while attempting a catch. In the semi final she fought the lone battle for the team and it seemed like she will replicate the same which she did in the opening match of 2017 world cup against the same opponent .Though there remained a area of concern about her batting as she often felt in the trap set out by the opponents around her legs, with 178 runs @ 35 and with the strike rate of 125 she became the 2nd highest Indian scorer in the campaign.

3. Young Blood turns Blue:
On of the silver lining of this Indian campaign was how the younger members of the team like Jemimah, Radha, Deepti rose to the occasion and proved that they are horses upon whom Indian management can rely on in the longer terms.  Jemimah’s innings of 59 against NZ and run a ball 26 in the semi final projected the maturity and the match senses this little fellow possesses. While her senior teammates thrown their wicket away in the pressure situation she stuck to the wicket. The ability to adopt to the situation, finding the gaps and the big hits, makes her a deadly combination. Radha Yadav found herself in the XI ahead of Ekta Bisht and she proved herself throughout the tournament. Her 3/25 against Australia was instrumental to defeat a team like that. Taniya Bhatia, who was playing her first World Cup failed with the bat as she accumulated only 22 in her 3 innings with a horrible strike rate of 66, was phenomenal behind the stump. Her 11 scalps included 9 stumping provide us evidence of the fittest and safest pair of hands in the World cup. If she improves in her batting she also can be asset for the longer run for India.

4. Spin it like them:
Indian Spinners picked up 30 wickets out of their 32 victims in the world cup that too mostly on the pitch like Guyana which turned out to be the batting paradise. None of the team found the answer to tackle the Indian spinner who were bowling slow, way far behind the stump and outside off stump, until England countered them to a thumping victory. Radha Yadav (8/115), Poonam Yadav (8/126), Hemalata (5/80), Deepti (5/122), Anuja (3/42) and skipper herself (1/29) took 30 wickets @ 17.13 out of the team average of 19.28 (32/617). Spinners were well supported by the superb keeping and the lighting fast stumping by the Taniya Bhatia.

5. You actually dropped the Cup:
In the semi-final Poonam Yadav dropped an absolutely dolly at mid wicket of Natalie Sciver. Sciver came to the crease when England was staggering at 24/2 after 5, chasing a modest total of 113. Another wicket or so could have turned the tide of the match in the favour of India. But as Sciver scored an unbeaten 52 of 38 to win the semi-final , Skipper Hamanpreet might have told to Poonam Yadav that you have actually dropped the Cup. Though the ground fielding was brilliant for India, the dropped catches remained the area of concern for Indian side throughout the tournament. They grabbed the difficult but dropped the sitters. Veda Krishnamurthy’s feat of grabbing the highest number of catches in a single match against Australia coincided with the 4 drop catches against the New Zealand in the very first matches and the list goes on.