Cricket. A simple word that unites entire nations into a roaring crowd and divides the world into teams of eleven. There is fight, anger, determination to win over the other on the field. But amidst the whirl of the team colours and flying of angry wickets and balls, the gentleman’s game is famous for its gentlemen.

Here are a few heart-warming examples of sportsman spirit that will make you smile and fall more in love with the game.

1. Sachin Tendulkar receives a warm applause from the players on his last test appearance. The West Indies made a tunnel for him to walk through on the big day, cheering him on one last time. 2. As South Africa lost the World Cup 2015 semi-finals, Dale Steyn went down on his knees, disappointed. Grant Eliott from New Zealand extended his hand to pick up his cricketing comrade, all their national boundaries forgotten in the spirit of the game. 3. Ricky Ponting and Sachin Tendulkar share a moment on the pitch, forgetting for a few moments that they are playing against each other. 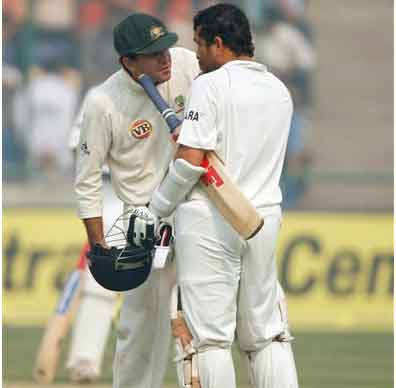 4. Pakistan’s Misbah showered praises on the Afghanistan team for their amazing fighting spirit. 5. Suresh Raina ties DJ Bravo’s laces for him. Being on the opposite team didn’t matter to him for this show of sportsman spirit.

6. A similar gesture seen in the women’s latest match between India and Pakistan. A game isn’t a game if you take it too seriously. Angry comments, rude hand gestures aside, these examples are the beating heart of the game of cricket.
Let’s hope this heart keeps beating and the game brings more and more people together across boundaries.
Cheers to the game!