Let us look at one of the six teams, team Falcons and its players. 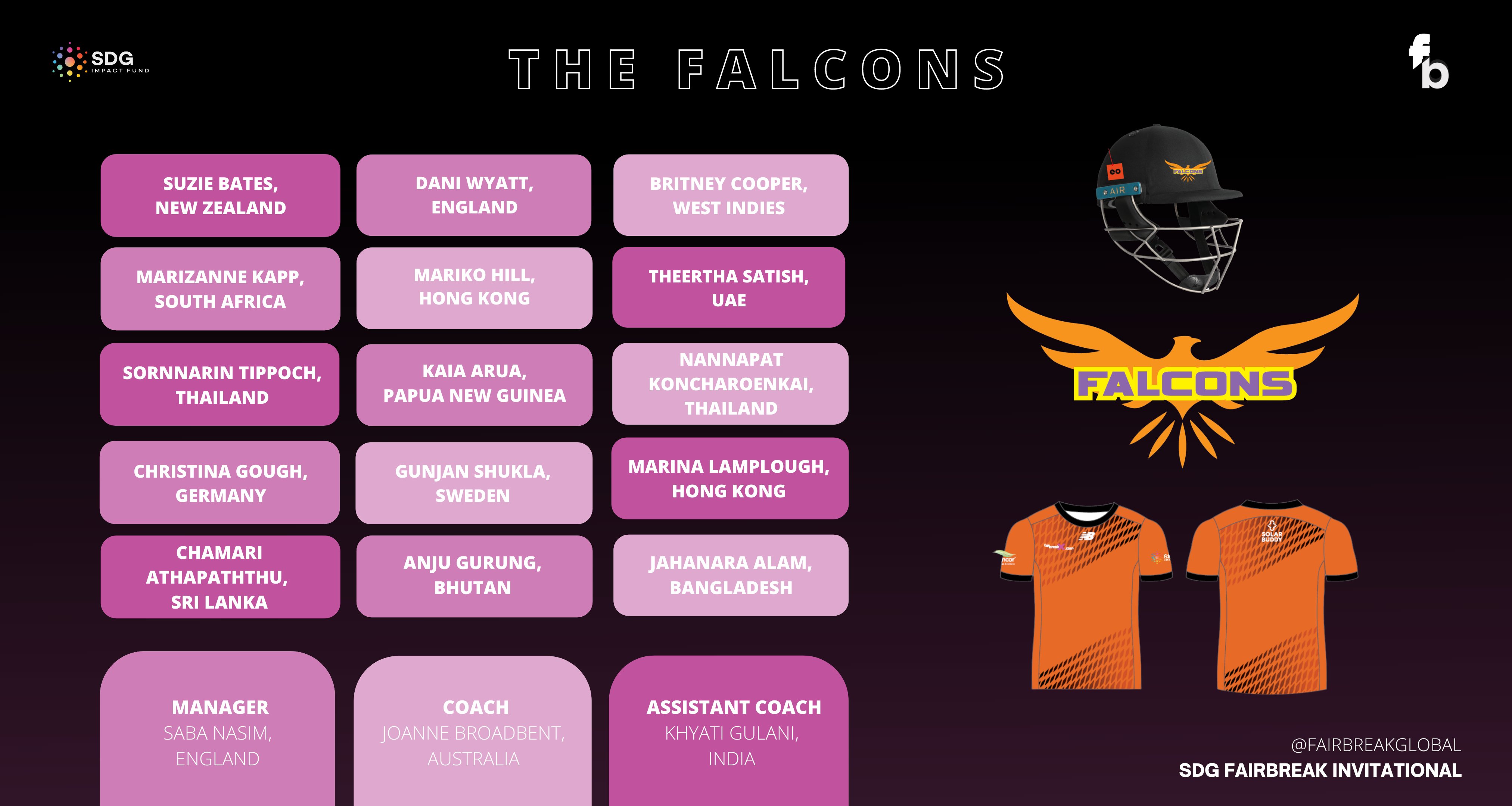 Some of the players to watch out for from this team will be Suzie Bates and Danielle Wyatt, who are prolific right handed opening batters from New Zealand and England respectively. Apart from Bates and Wyatt, there are Chamari Athapaththu and Marizanne Kapp, who are star all-rounders from Sri Lanka and South Africa respectively. Bangladesh’s Jahanara Alam will add fire to the pace department of the team.

She is one of the most prolific batters for New Zealand with over 8000 international runs. She is a right handed opening batter and can bowl right arm medium pace occasionally.

She is a stylish and attacking right handed opening batter from England. With more than 100 T20Is under her belt, she has a wealth of experience in the shortest format. She has close to 2000 T20I runs, including two centuries and nine half centuries.

She is a right hand middle order bat from Trinidad, who has played for West Indies in 73 T20Is since 2009. She has scored 608 runs and also has one T20I half century to her name. She was also a part of the winning squad that won the 2016 Women’s T20 World Cup in India.

The South African all-rounder has the reputation of playing in different leagues like the WBBL, the Hundred, etc. She is a prolific all-rounder, who has made some useful contributions with both bat and ball. In her career of 84 T20Is so far, she has smashed 1046 runs and picked up 66 wickets.

The all-rounder, who represents Hong Kong, made her international debut in 2019 and since then played 20 T20Is. The right hand batter has registered 296 runs and bowling right arm medium pace struck seven wickets. (As of April 26, 2022)

She is a left handed batter and wicket-keeper from UAE. She made her international debut in 2021 and since then played 10 T20Is, scoring 250 runs in nine innings, including the best of 64 not out. Behind the stumps, she has three dismissals. (As of April 26, 2022)

She is an experienced left handed batter and a right arm off spinner. She is also the former captain of Thailand. She has played 42 T20I, scored 226 runs and scalped 39 wickets.

She is a right handed batter and a left arm spinner from Papua New Guinea. She has featured in 21 T20Is between 2018 and 2019. She has mustered 199 runs in 16 innings and has picked up 22 wickets in 19 innings, including a five wicket haul.

She is a right handed batter and wicket-keeper from Thailand. She is vastly experienced with 40 T20Is under her belt. She has registered 470 runs in 31 innings, including a couple of half centuries. She is a safe house behind the stumps with 35 dismissals to her name.

She is a left handed batter and a left arm seamer from Germany. She has the experience of playing 22 T20Is since 2019. She is a prolific batter with 549 runs in 20 innings, including a century and three half centuries. With the ball, she has claimed 16 wickets in 19 innings.

She is the first Swedish to become a part of Fairbreak Global. She is a left arm seamer and a right handed batter. In 2021, she made her international debut playing a T20I against Norway.

She is an all-rounder from Hong Kong, who is a right handed batter and a right arm seamer. She has played five T20Is in 2019. With the bat, she has scored 29 runs in four innings and with the ball, she has been wicket-less in the two innings. (As of April 26, 2022)

The Sri Lankan captain is a veteran of the game having been around at the international level since 2009. She is a swashbuckling left handed opening batter and more than a handy right arm off spinner. She has 4500+ international runs and 50+ wickets.

The left arm quick from Bhutan has played nine T20I matches and has claimed 10 wickets. She made her international debut in 2019. She is a promising talent and has the ability to scale greater heights if given the opportunities and exposure.

She is a right arm seamer from Bangladesh. She is an experienced campaigner with 71 T20Is under her belt. She has accounted for 55 T20I wickets, including a five-wicket haul. She is consistent with her lines and lengths.

A lawyer by profession, she has played domestic cricket for Wanstead & Snaresbrook Cricket Club in England as a right handed batter and a right arm seamer. She won the John Smith Player’s Player of the year in 2009, 2013, 2014 and 2018. Apart from playing cricket, she has completed her Level 2 coaching. In 2015, she was awarded the ECB Coach of the Year.

She is a former Australian cricketer, who played international cricket between 1990 and 2000. She played as a left handed batter and a left arm seamer. She featured in 10 Tests and 60 ODIs. After retiring from playing cricket, she ventured into coaching. At present, she is the head coach of Northern Districts in New Zealand. Previously, she was the head coach of Sydney Thunder and NSW Breakers in Australia

She played cricket for Delhi for 10 years and immediately after calling it quits from playing dived into coaching. With a diploma from NIS, followed by BCCI level 1 and Cricket Australia level 2 certifications, she is an established name in the cricketing circle. First Delhi, then Nagaland and Chandigarh, she has been a coach for close to 15 years. The cherry on top for her has already worked with a FairBreak team which had 11 players from 11 different countries.

To know more about all the 13 Match officials, click here